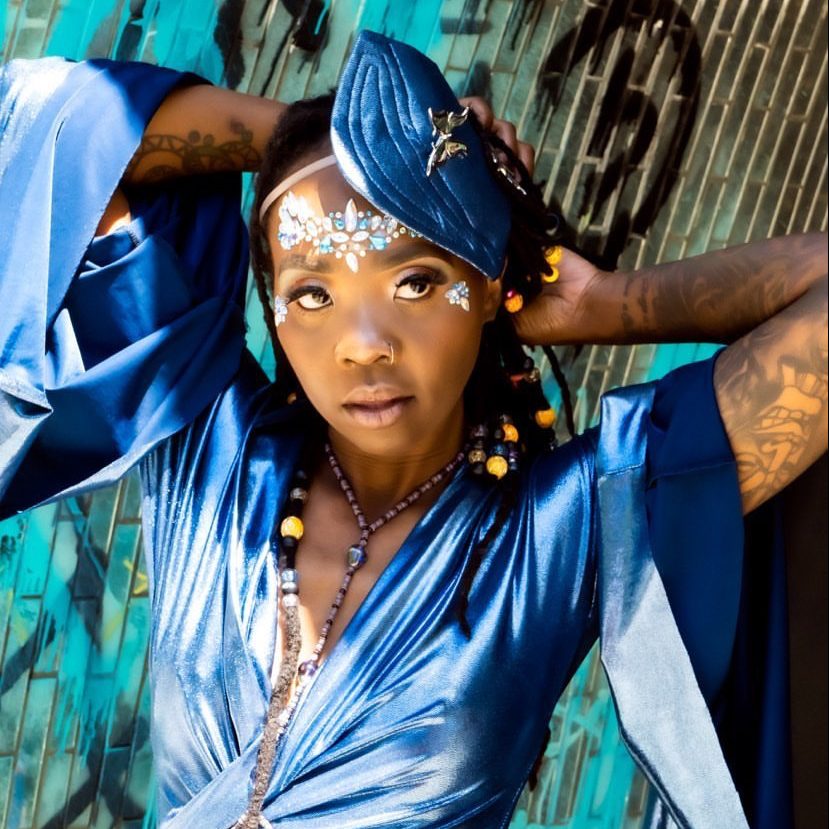 Ebony Payne-English’s status as a local cultural icon was cemented, literally, when she became one of the people featured in a series of murals erected across the urban core. It was actually the second time Payne-English has been immortalized on a wall.

“The first time I saw myself on a mural, I was with my daughter,” she says of a large-scale work adjacent to the Arlington Expressway painted by Nicole “Nico” Holderbaum. “She ran to the wall and hugged it. It was a dream come true.” Her newest portrait stands on the Forsyth Street side of the Jessie Ball duPont Center. Designed by the great Taylor Hardwick, the site functioned as the Haydon Burns Library from 1965 to 2005. The new mural was created Celso Gonzales Quiones.

Payne-English is in very good company, as the spot next to her on Forsyth is occupied by a mural of the late, great Zora Neale Hurston, which was also painted by Quiones. Hurston grew up in Northeast Florida, but later became a central figure of the fabled Harlem Renaissance. “She’s the author that has influenced me the most,” says Payne-English, who, beyond her status as a pillar of the Duval hip-hop scene, is also something of the region’s unofficial poet laureate. “I would not have a place here in the literary community had Zora not come before me and made it an undeniable fact that Black women from the south belong in the literary classic conversation.”

Payne-English’s latest project is a hybrid of music and film that she calls Kuongoza. The word loosely translates to “guide” or “lead” in Kiswahili, the native dialect of the Swahili people. “It is what my students call me,” Payne-English told me during a recent conversation about her latest project. “I prefer this term to ‘mentor’. I am a guide to young creatives. That is not a hierarchical situation. I simply have been where they are trying to go and want to help them find the better and more informed path.”

Kuongoza is her sixth album, but the multimedia nature of the work marks a step outside her usual creative comfort zone. Payne-English refers to the new work as a Hip Hopera. The album and film can be enjoyed separately, or in tandem. “I am very excited to have found a new way to express myself within the same medium I’ve used previously,” she says.

The film and the album both feature a variety of creators drawn from across the region. Locals TravELight and T.W.A.N lent their production skills to the record. Fellow Duval hip-hop standout Intricate The Almighty and singers including Sarafina Ethereal, Markeyta Williams, Lady G, The IGive, Kia Flow, Blu Flutur, Moses West each got in on the action.

The film had its premiere in May, in conjunction with Black Films Matter. “The premiere experience was the best night of my life besides the day I brought my daughter home from the hospital,” she says. “We had 75 guests and we got dressed up, walked the purple carpet, and had us a party. Flawless victory. That night was simply perfection.”

The trailer video, filmed at Rise & Grind Training in Orange Park, features characters from the film lip-syncing to the lyrics of the artist, who also appears. The facility is owned by longtime friends Jason and Shadreka Smith, who also own the Workout Babe clothing line. Other scenes feature street art in the city of Atlanta.

“I prefer this term to ‘mentor’. I am a guide to young creatives. That is not a hierarchical situation. I simply have been where they are trying to go and want to help them find the better and more informed path.”

Music and film are both very different disciplines, but Payne-English had relatively little trouble adapting her style to the requirements of this new, unfamiliar medium. “When you’re preparing to shoot for video, is it a different state of mind than preparing for music?” she asks, rhetorically. “It’s definitely a different mental situation preparing for visuals than just the music for sure. There are so many people to depend on for the visual process and I’m not used to depending on people like that to make my art.”

The work will appeal to a wide range of audiences, especially newer listeners who may be influenced by artists like Tobe Nwigwe and Sampa the Great. But the Afrocentric themes in the material have resonated in hip-hop since the 1980s. Such themes have received an enhanced profile after a tumultuous 2020. “I think there have been more conversations about what it is like to be Black in America than there has been in a long time,” she says. “Now, the world is watching. Now, even if they do nothing to help us along, they can never say we were exaggerating or misinterpreting the bigoted social behaviors we face daily in this country.”

The pandemic, meanwhile, was brutal for creators of all kinds. But things are slowly getting back to normal, and Payne-English’s sights are set firmly on the future, planning a run of screenings of the film and a full-fledged tour of the new record.

Another local screening of “Kuongoza” is scheduled for Sunday, July 4 at the Cinemark Tinseltown. “I’ve been away from the stage for over a year now and since the vaccine is out and people are back to work, it’s time for me to get back to doing what I do best and that’s perform.”

A screening of the film Kuongoza and Juneteenth block party will be held at Cinemark Tinseltown on July 4. Tickets to the release festivities and film-screening can be purchased here.