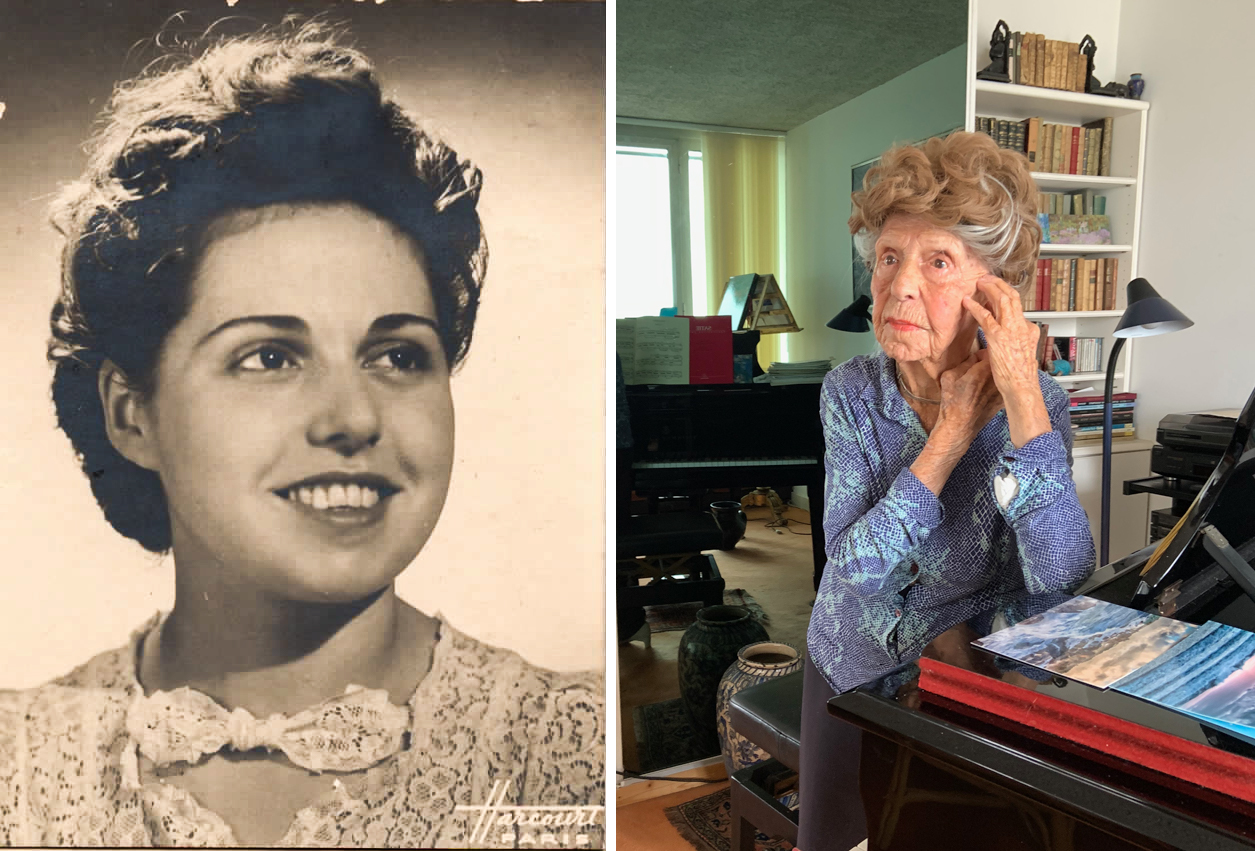 PARIS — Colette Maze welcomes me warmly into her apartment on the 14th floor of a building overlooking the Seine River. From her flowered balcony, she has a view of the Eiffel Tower. She offers me a whiskey or a cognac — along with a hearty laugh as it’s 10:30 in the morning.

It’s that humor, a sense of optimism and her beloved piano that have buttressed and comforted this centenarian through an often difficult life. Maze has just released her sixth album at the age of 107.

While she lives alone, on this day her 71-year-old son, Fabrice, has joined us. Maze sits down to play her Steinway baby grand — one of two pianos she owns — with her gray tabby cat, Tigrou, stretched out on the carpet near her feet.

Across the room is the Pleyel piano she received on her 18th birthday. Maze began playing at the age of 5. Her grandmother played piano and her mother the violin. She remembers concerts at their grand Paris apartment when she was a child.

But Maze, born on June 16, 1914, says her mother was severe and unloving. So she turned to music for the affection she lacked at home.

“I always preferred composers who gave me tenderness,” she says. “Like [Robert] Schumann and [Claude] Debussy. Music is an affective language, a poetic language. In music there is everything — nature, emotion, love, revolt, dreams; it’s like a spiritual food.”

Maze says she believes there is a guiding force in our lives. The fact that she grew up just steps away from Paris’ prestigious École Normale de Musique is one example. She auditioned for, and was granted, a spot with its director, legendary pianist Alfred Cortot. Maze’s other early instructors included virtuoso pianists Nadia Boulanger and Jeanne Blanchard. (She remembers Blanchard had tiny hands, just like her.)

Maze received deep and rigorous musical instruction from an early age and aspired to become a professional. But that wasn’t easy for a girl in the early 20th century. The piano was meant to be a pastime, not a career. For her parents, it was inconceivable that she become a musician.

“There were several levels, and the top one was concert pianist,” she says. “I just missed it because my parents wouldn’t let me stay in our apartment with the piano while they were away. They thought I might make a mess, so they put me in the maid’s room upstairs, which had no piano, so I couldn’t adequately prepare.”

Maze did attain the second level, qualifying her to teach. She went on to become a teacher for nearly 20 years.

I ask her what memories she has of the war. She begins to talk about going down into the basement before her son gently interrupts to tell her she’s confusing World War I with World War II.

With a hearty laugh, Maze realizes her mistake. What’s incredible is that she’s old enough to remember both world wars.

She recalls the thundering noise of the Germans’ long-distance artillery cannon, known as “Big Bertha,” being fired on Paris, as a 4-year-old in 1918 when her family took refuge in their basement.

In June 1940, when France fell to the Nazis, she and her best friend rode their bikes hundreds of miles to the rural south, part of the great exodus of panicked Parisians.

After the Second World War, Maze met and fell in love with the man who would become Fabrice’s father. He was already married. She became a single mother, and her own parents cut her off.

She raised her son in a tiny apartment and struggled to make ends meet.

“I realized later that this bourgeois family was really selfish,” Fabrice Maze says. “They had no heart to leave their daughter in this very poor condition.”

In that milieu, in that family, a woman could not take her destiny in hand, he says. “She was expected to have a very bright and great marriage with someone rich and be a perfect wife,” he says.

“The problem is Colette was an artist in an excessively classic family that did not understand her, so she was completely isolated,” he says. “And despite that, she persevered and did take her destiny in hand. She did not want to be in conformity with the family tradition. She decided she was an artist, a musician, not a housewife, so she married the piano … to the detriment of all the social conventions of the day.”

Later, as her son was growing up, she did choose to marry. But he says, “She was never lucky with her sentimental life, she was not understood by her family. She fought. And her piano was a source of equilibrium.”

Fabrice Maze began to think about recording his mother when she was in her 90s.

“I always knew the piano — from morning to night — she was always at the piano. She sort of breathed through the piano,” he says. “And for me, it was important that she could record, to leave a trace — to leave a message.”

There was another reason for recording her. Colette Maze is Cortot’s last living pupil. Cortot taught a specific technique and method, focused on relaxing the arms and hands.

“So the way she’s touching the piano is very special,” her son says. “It’s very rare. The way she is playing Debussy is very unique.”

He says his mother has always been self-effacing and wasn’t interested at first.

“She told me, ‘No, there are so many great pianists in the world, it’s useless.’ “

But he says she finally came around to the idea. They started with a first recording, then a second, a third and on up to a sixth, which was released in May — a compilation of all the Debussy from her earlier recordings.

“Now she’s been recording for the past 15 years, and she’s left about eight hours,” he says. “It’s very precious. Now she’s existing through her piano, and her piano was her life.”

Maze records her albums at home with the help of a sound engineer — usually on Sundays, when the neighbors are likely to be out and the building is quieter.

She loves Schumann and says she is entranced by the love story between the 19th century German Romantic composer and his wife, Clara. She says she’s still waiting for her own Prince Charming.

You have to look at life from all sides, she says, and there’s always an angle of joy.

“Youth is inside us,” she says. “If you appreciate what’s beautiful around you, you will find a sense of wonder in it.”