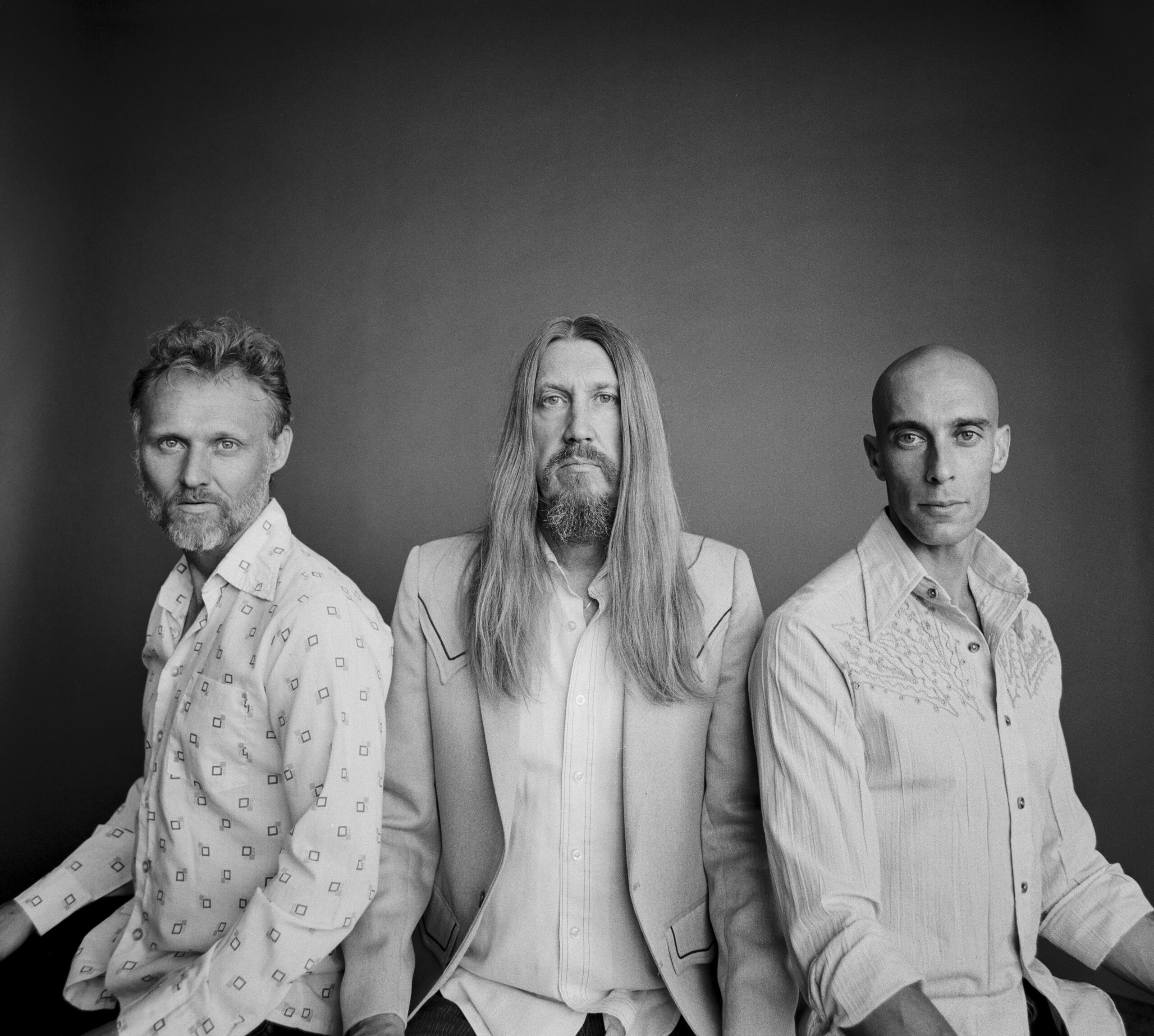 If there is a current band willing and able to reference delta blues king Charley Patton and jazz polymath Ornette Coleman, it is the Wood Brothers.

Since 2004, the roots-music trio of brothers Chris Wood (bass/vox), Oliver (guitar/vox) Wood and Jano Rix (multi-instruments/vox) have been forging an inventive blend of blues and folk through an open-minded jazz paradigm. They share divergent yet similarly gritty lineages: Chris was a founding member of ‘90s NYC avant-groove band Medeski Martin & Wood (MMW). Oliver took his love of gutbucket blues on the road as a sideman for Tinsley Ellis, and with his own band, King Johnson. The proverbial journeyman player, Rix has worked with dozens of disparate-sounding musicians, including Victor Krauss, Gabe Dixon, and Zac Brown.

Unsurprisingly, the Wood Brothers have been branded with the inevitable nomenclature of ostensibly any group that dare use traditional touchpoints or even acoustic instruments in the 21st century: Americana.

It’s a term that’s as misleading as it is conveniently dismissive.

“The term has always annoyed me as well,” says Chris Wood, from his home in British Columbia. “A friend of mine has this great line: ‘Hardening of the categories promotes art disease.’ MMW dealt with being mislabeled early on since we didn’t fit any genre. Even though we improvised like a jazz band we weren’t really a jazz band. We were mislabeled as ‘acid jazz’ but acid jazz was about drum loops and we interacted as players on stage. Phish were playing our music before they went on stage and suddenly MMW were a jam band: which we were not. And we hated that term, too. So, the Wood Brothers have a lot of influences that are considered folk and ‘Americana’ but we also have influences like New Orleans, Texas blues, and gospel. I think it’s better now, but with Americana I always wondered, ‘Where is the Black American Music in all of this?’ The Wood Brothers have been labeled Americana and other things we don’t want (laughs) but whenever you have a label you immediately want to shake it off.”

On the band’s most recent release Kingdom In My Mind, they decided to shake off even the standard songwriting process. While essentially trying out their new recording studio in Nashville, the Wood Brothers began recording with no real goal in mind or song in hand. What became a de facto level check became their inadvertent songwriting process.

“We had zero material written and we just went in there and we improvised in order to kind of fill out the space and we threw up mics and recorded it so that we captured these completely out-of-the-blue improvisations. Everybody in the band is a great player and worked on their instrument and has a lot of vocabulary. So, music material came out when we allowed ourselves just to improvise and capture what we would have never come up with if we’d written a song first.” Chris then took the raw jams and edited them into what would become the band’s new batch of material. “I would spend a lot of time editing down maybe a 20-minute improvisation until a song form appeared. And we’d write material over these things.”

The resulting 11 tracks of Kingdom In My Mind sound like cogent songs albeit tunes with impressive underpinnings that still reveal glimmers of the trio’s without-a-net creative process. Case in point: “Little Blue.”

Driven by a wobbly bass-and-drums riff that merges 1970-era electric Miles with Crescent City strut and roll, guitar riffs stab into the meat of the tune, with shimmering vibrato’d notes gliding through the mix. The lyrics are deceptive, somehow joyous but also weirdly somber: “Little blue drop of water / floating in emptiness / everybody that I know and love / that’s where they live.” The song plays too dark and weird for orthodox jam bands and surely heretical to the expected hoedowns of purist Americana. “Don’t Think About My Death” also splits genres as soon as they can even be recognized. Opening with a syncopated Fela Kuti-style riff and rhythm, it soon rips open into a Hound Dog Taylor bluesy spree. The lyrics are a confident testimony from a protagonist, certain of another night of addiction, denial, and deranged love.

Kingdom In My Mind is many things: soulful, raucous, sophisticated, and unpredictable. But “lighthearted” is not one of them. The lyrics all seem to point inward, touching on powerlessness and unwanted introspection, the side effect of insight. Even the soft rapture of “Little Bit Sweet” plays like a love song tethered to the certainty of age and decay.

“I think there are themes of brokenness and getting over things and learning how to deal with these constant inner dialogues that we all have that tell us stories about who we think we are supposed to be—or what we can and can’t do,” says Chris, of the album’s lyrical unity. “I think it’s sort of painting an impressionistic picture of the part of life where you went through some heavy sh*t, and you got out the other side. And kind of taking stock and learning how to deal with the dark places that your mind goes and how to heal from some of the brokenness. And how it gives you amazing tools to live your life from there on out; you know?”

The Wood Brothers have created an impressive catalog of studio and live releases that have made them longtime critical favorites, as well as veterans of both the festival scene and playing to packed venues around the globe. Their previous self-produced release One Drop of Truth (2018) was nominated for a Grammy Award  for (what else?) Best Americana Album. Kingdom In My Mind is an album forged from free improvisation and made cohesive with lyrics that are refreshingly non-pop and non-jammable. Who wants to twirl and “wind bathe” in an edible gummy haze when a lead singer is intoning cosmic existentialism over an unpredictable blues shuffle in an odd-time signature, all dripping with fuzz bass guitar?

Chris Wood and band seem content with remaining discontent with labels, genres, and expectations. The Wood Brothers are individually and collectively high-level improvisers. And they have surely met and exceeded Chris’s vision imagining “what might happen if Robert Johnson and Charles Mingus had started a band.” While he’s grateful of the band’s success and devoted fanbase, he seemingly measures the band’s success by the purity of the conveyance of what and how they play.

“I think it’s much like the quality and nuance of playing, of improvisations. I think what’s brilliant about someone like Yo-Yo Ma is that he has played the Bach Cello Suites thousands of times, but every time it’s played, it’s an improvisation in the sense that he’s in it. It’s almost like the notes are just happening and he’s just hearing them and his fingers are going in the right places. Ray Charles might be the greatest example of any artist taking a song everyone already knows and then making it totally personal and his own. The journey is different to get to that point but that’s in some ways, the main point: that kind of intimacy and being authentic.”