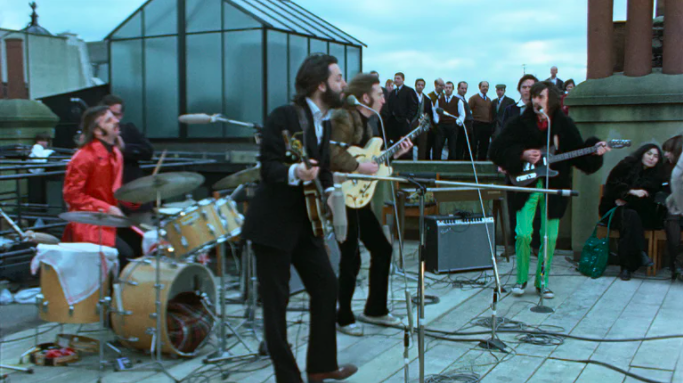 If you’re a fan of The Beatles or even just a regular user of social media, you’ve probably heard the buzz around the new documentary The Beatles: Get Back.

Director Peter Jackson pored over more than 60 hours of footage and exponentially more hours of audio, all of which was originally captured for Let It Be, the documentary that chronicled the recording of the album of the same name, which came out in 1970. That documentary did much to cement the narrative of this late period of the band––specifically that Paul McCartney, John Lennon, George Harrison and Ringo Starr were increasingly at odds while recording this seminal work.

Jackson’s documentary, which premiered on Thanksgiving day, in three two-hour-plus installments, tells a much more nuanced story. Yes we find the Beatles growing apart and arguing. But after a tumultuous first week, the group puts their differences aside and, rather joyously, crafts the songs that would make up Let It Be.

“My greatest takeaway is the same as Peter Jackson’s: In Spite of the discord at the beginning, this is a very joyful film.”

Pitchfork called The Beatles: Get Back revelatory. NPR’s Ann Powers called it “a gift” to listeners. Probably my favorite quote about the movie came in a tweet from podcaster and comedian Marc Maron who said, “The Beatles are exactly like I thought they would be. I’ve  known them all my life. This is the first time we’ve hung out though.”

And if you’re a music fan, watching perhaps the most important band of the 20th century unfurl a handful of their best known tunes, in real time, is definitely worth the 468 minute runtime.

For more on Get Back, I reached out to two Jacksonville Music Experience contributors, WJCT station manager David Luckin (who is also JME’s resident Beatle-maniac) and local musician, producer and writer Glenn Michael Van Dyke (also a Beatles fan).

Our conversation has been edited for content and clarity.

So, I was telling Glenn the other day, that since I watched Get Back I’ve just been asking everyone I know whether they’ve seen it, ready to pounce on them with my own thoughts. So I want to hear from you both. What stood out to you most about the film?

David: My greatest takeaway is the same as Peter Jackson’s: In Spite of the discord at the beginning, this is a very joyful film.

Glenn: I mean, on first blush it’s the film coloring. It is mesmerizing. The whole thing is so voyeuristic that I think part of what carries the whole project is that it’s like a time capsule. I was born in the ’90s so The Beatles, to me, are frozen in pictures. It feels surreal to see the color of their fashion and all the ’60s music equipment looking so fresh and clean. It was also striking to see what people did with their social lulls without modern devices. I think you could argue that there’s just as much blank staring and smoking cigarettes as there would be scrolling! Although they do seem to get a ton done in a short amount of time. This is entirely speculative, but maybe their attentions aren’t as fractured.

And David you told me you saw the original Let It Be in the theatre, right? What story did that film tell and how do you see the Beatles differently after watching Peter Jackson’s film?

David: When I walked out of the theater in 1970, I was a bit sad because it appeared The Beatles were over and they didn’t get along very well––maybe didn’t even like each other. When you see Jackson’s version you’re left with the feeling you just watched a collaboration of musicians who really did like each other and really did work well together. And the viewers are treated to a behind the scenes look at the process of songwriting.

Glenn, we get to see so much of the music-making process in this movie. There are moments of inspiration, sure. Lots of silliness and sitting around. But they really work at these songs, hammering at the same verse over and over. What did you think, as an artist and producer, of watching them work through these songs (or num-bahs as they call them)?

Glenn: It was really validating. I mean, they’re insanely prolific. But again they didn’t have the same pressures of distraction. There are so many people in that room, each with a hyper-specific job, which allowed The Beatles to just be The Beatles, for better or worse. That may still exist in the upper echelons of pop music but even so, musicians aren’t as insulated from the business or promotional side anymore and I don’t know if that’s better or worse. Maybe just different. [Laughs]. That’s a tangent!

It was validating to see the hyper-specificity and time they took to work out the smallest details that most people wouldn’t ever really notice. It’s what really makes those songs hit the way they do. They put so much care into making sure that record didn’t just sound like the same thing over again. I think too often artists compare themselves to glorified geniuses who seem to spill perfection onto the tape because there isn’t as much documentation into the grueling process that recording can be. No one in that room is a pristine specimen of perfection and it’s refreshing to see just how derpy they all are. Practice and repetition isn’t glamorous so it gets left out of the story. I mean we all knew The Beatles work Eight Days A Week, but it was cool to watch it unfold in all of it’s messy exhausting truth.

The documentary has been widely praised. Of course, it being the age of the hot take, the film has its detractors. A piece in the Washington Post called the Beatles overrated and wondered why the Fab Four were still being talked about in 2021, given there’s so much good new music out there. What do you think? What makes the Beatles relevant or worth talking about in 2021?

Glenn: I admittedly haven’t been paying attention, but I think that’s fair, I get it. But also why not talk about it? It’s not like the Disney+ platform or the internet as a whole is running out of space. It might not be for everyone but there’s certainly a lot to look at and unpack about celebrity and process for anyone who wants to look. It’ll be old news again soon enough.

David: The reason there is so much good music today is because The Beatles laid down the groundwork or the foundation. The Beatles could be as deep as Sgt. Pepper’s or as superfluous as “You Know My Name.” The bottom line is: The Beatles elevated pop and rock music with innovative instrumentation (cellos, violins, mellotron) and use of loops, etc. And because of that, their influence is still felt today. That’s why we will talk about them in 2021 and will still be talking about them In the year 2525.

“The whole thing is so voyeuristic that I think part of what carries the whole project is that it’s like a time capsule. I was born in the ’90s, so The Beatles, to me, are frozen in pictures.”

Would you recommend Peter Jackson’s film only to fans of The Beatles? Or do you think any person interested in music would enjoy this nearly eight hour film?

Glenn: I feel like you need to be more into music than you are The Beatles to really enjoy this film.

David: I’m not sure. I loved it, though. And there are more highlights for me than I can count. You get to see not just the songs for Let It Be coming together, but also for Abbey Road. I loved seeing John and Paul killing “Oh Darling.” And finally John playing the theme from Orson Wells film The Third Man was just so special.

In this article: Abbey Road, David Luckin, documnetary, Get Back, Glenn MIchael Van Dyke, Let It Be, NPR, Peter Jackson, The Beatles and WJCT