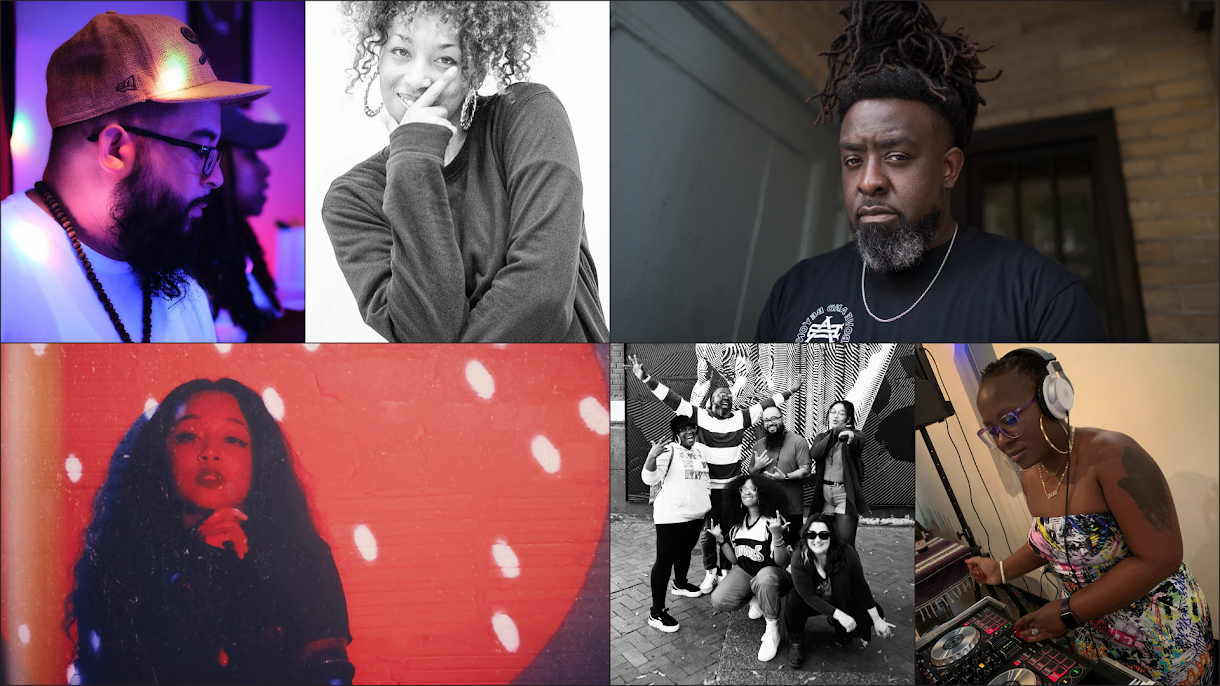 “Hip Hop”, as we know it today, was officially born in the Bronx, NYC, in September of 1973. As we approach the 50-year anniversary of the world’s most dominant cultural asset, the influence of hip-hop has spread into virtually every aspect of American life. That is just as true right here in Northeast Florida, which has nurtured its own dense roster of hip-hop talent over the past four decades. The past, present and future of that scene will be on display, downtown, at the inaugural JWJ Hip Hop Festival, which is being held at James Weldon Johnson Park this Saturday, February 19, from 10am to 5pm.

“The idea for this festival came from a brainstorming session I had with Jihan White/DJ EnerJi, our Marketing Coordinator,” writes Liz McCoy, the Executive Director of the Friends of James Weldon Johnson Park. “We wanted to think of a unique and different way to celebrate Black History Month. We wanted to highlight hip-hop history, but needed collaborators to make sure it would be presented with authenticity.

A braintrust for the JWJ Hip Hop Festival was assembled, including people standouts and pillars of the scene Mr. Al Pete, Mas Appeal, and Che Forreign of hip-hop collective L.O.V.E Culture and dancer/choreographer Rochelle Underdue. The park partnered with award-winning Cultural Anthropologist, Dr. Melissa Hargrove, who has specialized in Geechee Gullah culture, as well as hip-hop culture. Formerly a professor at UNF, Hargrove has since moved up to teach at American University in Washington, DC. Together, they have curated a program designed to highlight the cultural impact of hip-hop.

“I realized that it was a scene in Duval in 2000,” writes Al Pete, veteran emcee, DJ, and podcaster, and also a regular contributor to the JME and WJCT. “I knew of emcees in the 90s, but I witnessed my first official cypher in 2000 at Voodoo Lounge. From my perspective, Asamov, DJ Therapy (aka Paten Locke), DJ Shotgun, Molecule (aka Mal Jones), East Unit, Simple Complexity, and 3rd Diemenchun are the key creators. … Stillwater, Willie Evans, The IGive, Jay Kai, and the new kings Flash the Samurai and IntricateTheAlmighty.”

Hip Hop is built around five pillars, each of which has served as individual vehicles for the culture to have world-changing effects, across the board. Obviously, rap music has been a singular force in the music business. The best rappers have brains more supple than the collagen fibers in a contortionist’s body, and their larger-than-life personalities have served as templates for two or three generations of American youth to project their own ambitions onto.

The emcee is the centerpiece of hip-hop, but that’s just one part of it. The genre was created and nurtured primarily by DJs, starting with Kool Herc, a son of Jamaican immigrants who took the sound-system concept developed by King Tubby and Coxsone Dodd and brought it to DIY house parties. Two turntables and a microphone –– that imagery is hardwired into the culture, and the technical developments made with that basic setup (along with related items like samplers, drum machines and, of course, mixers, which are the real MVP of the genre) have directly influenced most other genres, some of which didn’t even exist before. This is the way.

The emcee and the DJ work together as a unit to provide the show, in its most proper sense, but hip-hop is one of the rare forms of performance art where the audience itself plays a role in that performance. The near-infinite array of call-and-response lyrics in the music reflects the value placed on audience participation, and that dynamic really came through in its earliest days in the form of the b-boy. Fusing elements of modern dance, mime and minstrel dancing with phat dollops of Harlem Swing (whose greatest innovator, the late Frankie Manning, was actually born in Jacksonville) to create the greatest body of fresh work in the dance world since Twyla Tharp. Their style has, in turn, influenced everything from ballet to women’s gymnastics, and even NFL touchdown dances.

As for graffiti, the term itself was coined as a pejorative, but its value as such has faded, as the aesthetic became increasingly lucrative. Artists like Banksy and Shepard Fairey have sold in the millions, while the work of a true icon of the NYC scene like Jean-Michel Basquiat ranks on the very highest level of almost all artwork ever made. A similar trajectory was followed by countless visual artists around the country, people who got their starts painting trains and walls, but are now established in the art world. Here in Jacksonville, organizations like CoRK, Downtown Vision and the Art in Public Places have invested millions in our growing public-art scene, in which many key players are, at heart, graffitos.

“We have a variety of Duval based artists in each pillar,” writes McCoy, “including Mas Appeal, Mr. Al Pete, Enerji, all DJ’s, Tough Junkie, Simple Complexity, Che (Lyricists), In the Midst Dance Platform (Dance) Scotty Briggs, Werms Two, Grace Bio, Bash (Graffiti Art) and L.O.V.E. Culture (Hip Hop Artist).” There’s also a panel discussion scheduled for 12:30 pm; it features Geexella, DJ Julius Fausto, Qualaam Waters of All Pro Studios, David Lofton of Icon Clothing, as well as myself. Hopefully, we can help deliver a little extra knowledge, since that is the fifth pillar of Hip Hop. And what better place to spotlight this aspect of local culture than in the very heart of downtown, where so much of this activity has taken place?”

After the park was renamed in 2020, patrons have packed the itinerary with a lot of fresh new programming, much of which relates to local Black history, including hip-hop. Whether it’s observing the anniversary of Ax Handle Saturday, or marking the birthday of the late Jordan Davis, diversity and inclusion are a priority among organizers, and this festival is of similar intent. (Note, also, that the Black History Parade and Melanin Market are both taking place at the same time on Saturday, at 822 A Philip Randolph. By all means, make a day of it.)

From JWJ Park, you’re just blocks away from a litany of long-gone hot-spots of local hip-hop history: Milk Bar, Burro Bar, Voodoo, Paradome/618, Stripmine Records, Thee Imperial, The Cave. So many freestyle cyphers at the Landing, or the old Greyhound station, or even JWJ Park itself. Us old-timers can go revisit those memories, while the kids make new ones.

The JWJ Hip Hop Festival is held on Saturday, February 19 from 10a.m. to 5 p.m. in James Weldon Johnson Park in Downtown Jacksonville. It’s free to attend.