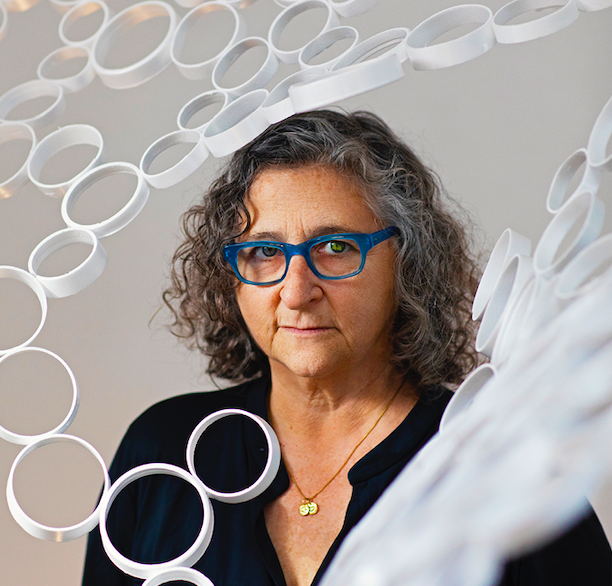 Jax-based, Brazilian-born artist Sheila Goloborotko's new exhibit 'many small gestures' will be on view at the Corner Gallery inside the Jessie Ball duPont Center beginning Saturday, February 12 as part of the 'Moving the Margins: Artist-in-Residency program | Credit: Photograph by Toni Smailagic

Creativity, activism, community and a surrender to the Other converge in the work of Sheila Goloborotko. The Brazilian visual artist and educator makes multimedia pieces that she describes, in part, “as a bridge between individual mastery and community activism, exploring the shifting boundaries of the information age as it relates to multiples and Collective Consciousness.”

Sheila Goloborotko’s upcoming show, many small gestures, is the latest exhibit in the Moving the Margins: Artist in Residency series, located at the Corner Gallery inside the Jessie Ball duPont Center in Downtown Jacksonville. Goloborotko estimates that, between prints and installations, there will be eight to 10 series featured in many small gestures.

“You know, some artists work with one material, one technique, and have one narrative. I see myself as almost being a polygamist in the sense not in my marriage, but in my art,” explains Goloborotko. “Because I work with several materials, with many mediums, many techniques, and most of the time with all of them at the same time.”

The exhibit addresses juxtaposition and adaptivity, conveyed through unusual media yet pointing towards universal concerns, including climate change and our rickety healthcare system. A column of Astroturf decays into a railroad track; white cardboard, still emblazoned with a logo, blooms large as a coral-like structure; a 2D image of pills are now labeled with principles like kindness, acceptance, hope and mindfulness.

“I’m pretty healthy. But I opened my medicine cabinet and I have 24 pills! One is for allergy; one is for migraine. I’m looking at all this stuff. And I’m like, ‘Can I give super-powers to my pills?’”

She photographed, then printed the pills in halftone, then designated new powers. “So, one will be for hope. One will be for mindfulness. And then I’ll give antidotes: an antidote to racism, and intolerance, and greed. Because you know, it’s boring just to have an ad for headache pills! This little, small gesture is to call people’s attention to, ‘Do we do you really believe we can be healed? What is healing?”

Visitors to the exhibit can create stamps of the pills with an on-site stamp-making machine, a kind of prescriptive print to diagnose universal ills.

“…sometimes the poetics of the music is intense. It’s incredible. I might write down the words and that will be become a title of a piece, or become something that I’m going to be thinking and working with for a while.”

Whether through providence, persistence, or a mixture thereof, Goloborotko boasts a career spanning nearly 40 years. Her work has been featured in more than 150 exhibits in museums and galleries around the globe.

Thirty of those years were spent in New York, where she worked and taught at Brooklyn College, the Pratt Institute, and SUNY. “I’m one of the first artists to move to [Brooklyn warehouse district] Dumbo when it didn’t have a name,” she laughs.

Along with her current studio in Jacksonville, she’s maintained a decades-old printmaking studio in the NYC borough. Since 2015, Goloborotko has been an associate professor of printmaking at UNF. “I feel like I helped put Brooklyn on the map. And coming to Jacksonville, to meet people like [Moving the Margins curator] Shawana [Brooks] and [Yellow House Gallery owner] Hope McMath, and to see how all of these artists have been creating the culture ‘behind the walls’—it was amazing. I like it here, and I want to contribute.”

Goloborotko came of age in the 1960s and ‘70s, when Brazil was under the rule of a dictatorship (one supported by the United States government) of a military regime, when free speech and any opposition were quelled by torture and death. Naturally, the visual arts and music were routinely censored.

“We had to be aware of what was happening around us to be able to organize and fight and survive. We were under a brutal military regime for 20 years, until the first elections in 1986. The power was in the music of Brazil. Our composers were creating music that had secret messages so we knew what it meant to be exiled.”

Goloborotko cites Chico Buarque’s 1971 song “Construção” as a strong example of subterfuge and protest that cleverly flew under the radar of the government censors. “In the song, Chico tells the step-by-step story of a construction worker’s routine: he wakes up, takes the bus, goes to work, where he could fall and there’s no security if he does. And if he falls, no one cares. So basically, you’re growing up listening to the song and you’re like, ‘We have to defend these people, right? We have to stop exploiting people. So, with the censors looking for things that were too political or sexual, for the musicians back then it was beyond ‘getting signed’: it was just getting through.”

When working, Goloborotko listens to music, podcasts or creates in silence. But she admits that she usually works with “sound all around her” and notices that it can influence her art.

She keeps an open mind, and follows newer artists. Mexican indie artist Silvana Estrada is a recent find. “I have my table covered in paper and glue, phone numbers, etc. It’s like I’m a cavewoman,” she laughs. “And then sometimes, the poetics of the music is intense. It’s incredible. I might write down the words and that will be become a title of a piece, or become something that I’m going to be thinking and working with for a while.”

The opening reception for many small gestures is held from 5-9 p.m. Saturday, February 12 at The Corner Gallery inside the Jessie Ball duPont Center. The show runs through May 4.