of Montreal celebrates the release of Kcrraannggaanngg!! pilsner with a show at Intuition Ale Works 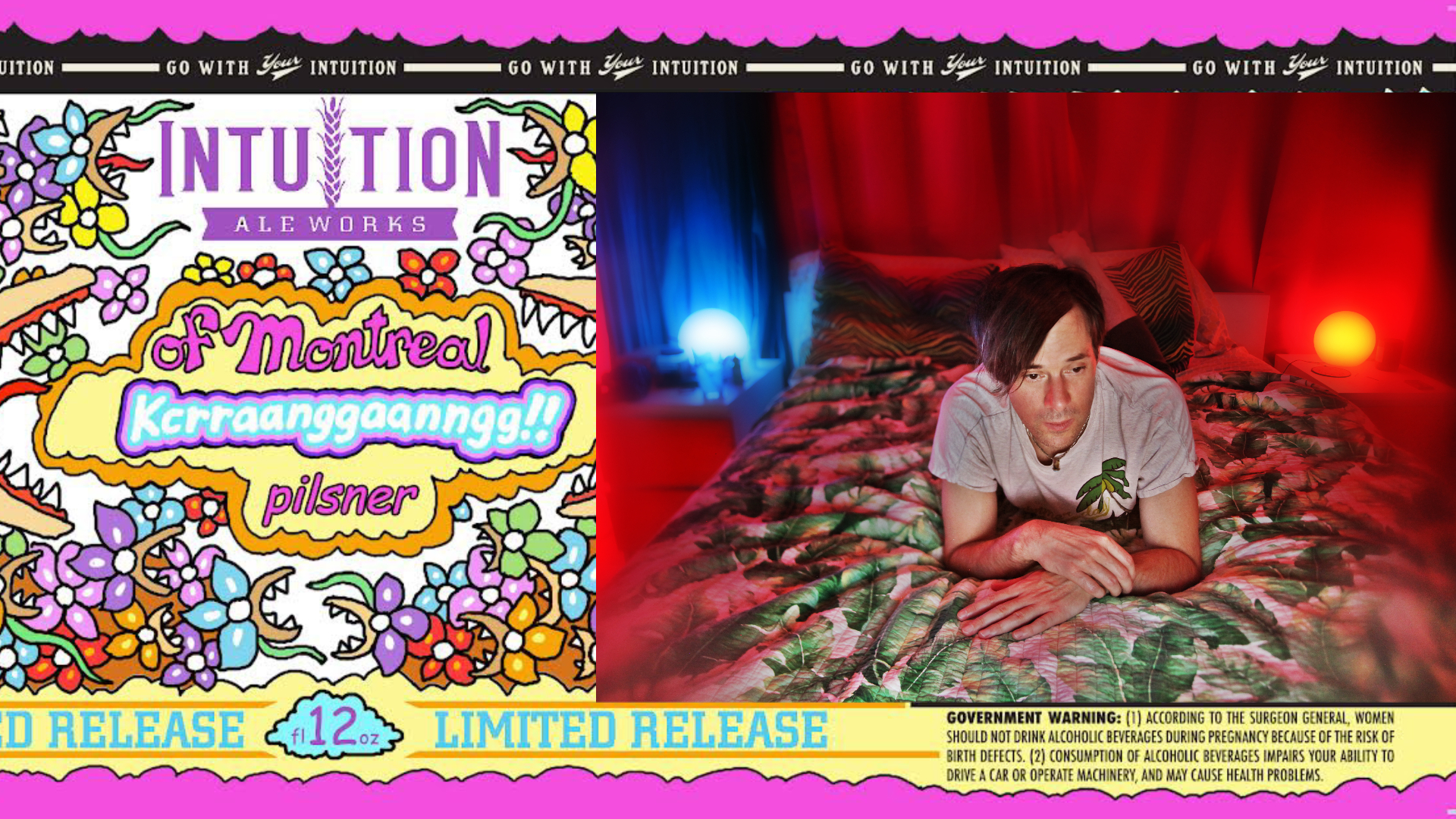 It’s often said that music benefits from collaboration. And in a true art-meets-art symbiosis, Intuition Ale Works (IAW) has partnered with popular indie-pop outfit of Montreal on the brewery’s latest offering: a pilsner called Kcrraannggaanngg!!

Led by singer and multi-instrumentalist Kevin Barnes, of Montreal was forged in Athens, Georgia in the mid-90s but gained wider attention in the mid- to late-aughts with a run of well-received releases, the band’s infectious sound drawing upon a broad range of sounds from ‘60s psychedelia to electropop, R&B and funk.

Founded in 2010 in Jacksonville, IAW became the first craft brewery in the state of Florida to can its beers in 2012, endearing itself to beer-aficionados across the Southeast with its flagship People’s Pale Ale, Jon Boat Coast Ale, I-10 IPA, King Street Stout and Easy on the Eyes session IPA.

The limited-release Kcrraannggaanngg!! drops Thursday, March 10, when of Montreal plays the Bier Hall, the music venue inside IAW’s Downtown taproom. But the seeds of collaboration between Jacksonville-based brewery and the Athens-based band were actually planted more than a decade ago.

IAW head brewer, Andrew Cattell made the initial pitch. Cattell had an inside track, as he and of Montreal’s tour manager, Michael Wheeler, have been friends since their days at Florida State University. On Wheeler’s invitation, Cattell even joined the band on tour for a spell in 2008. The long-lasting friendships forged while on the road made collaborating on a beer a rather effortless endeavor.

“I just reached out to [Wheeler] and asked him if the band would be into it,” explains Cattell. “I asked them what kind of beer they liked and what they had been drinking lately and went from there.” There were conversations about sour beers and fruity beers, but the committee landed on a very approachable 5% ABV pilsner, a pale lager that is often described as light and crisp.

When Cattell finally had the right beer, he approached IAW Chief Operating Officer, Brad Lange, and made the pitch. Lange was immediately excited about the project.

“of Montreal had been scheduled to play our Bier Hall just before the pandemic shut the world down in 2020,” says Lange. “On their end, the band was really enthusiastic about rescheduling the show… It makes perfect sense to do something this fun right now with them.”

The beer was set. The show date was secured. Now, the brew just needed a name. There were some ideas offered on both sides, but ultimately it was Barnes that offered the cacophonous moniker.

“The name is a play on the Swedish rap collective Drain Gang,” Barnes said. “We have a monthly podcast that we do called Kcrang Out. And the people that take part are called the Kccrrraaannngggaaannnngggg.”

Barnes tapped her brother David, who has been the go-to artist for much of the band’s discography to date, to dream up the artwork for the cans.

“(The artwork) is from this idea I came up with for their album Skeletal Lamping,” David says. “The idea is that plants get tired of being at the bottom of the food chain and evolve to become more dangerous so they can give as good as they get. Beer has always seemed like one of those things made from plants that has evolved into a new organism and it’s definitely not passive. In its new form, it has a bit of a bite to it.”