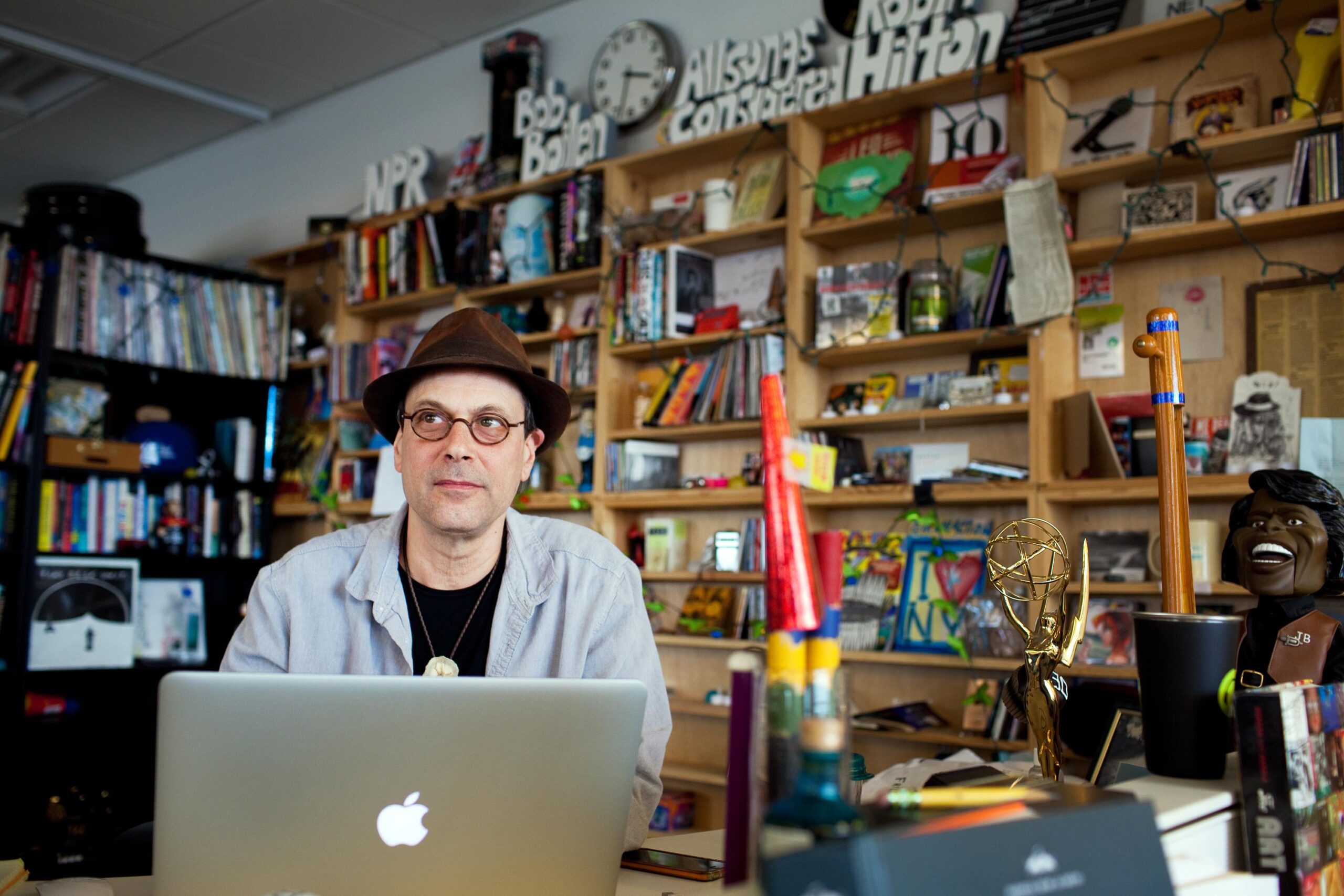 NPR’s 2022 Tiny Desk Contest is underway. Over the past seven years, nearly 35,000 musicians have submitted their videos to the Tiny Desk Contest in the hopes of being chosen to perform as part of NPR Music’s signature music discovery series. Now, NPR is once again calling for unsigned bands and musicians to submit their entries until the Contest’s deadline of Monday, March 14. (Go here to learn the rules and upload your submission.)

From the office of NPR Music in Washington, D.C., the Tiny Desk Concert Series has become a global, cultural phenomenon. Since its debut in 2008, more than 800 artists –– from Taylor Swift to Chris Stapleton to Billie Eilish to the cast of Sesame Street –– have performed intimate, often stripped back sets at the Tiny Desk, which is literally the desk of All Songs Considered host Bob Boilen.

I recently chatted with Boilen, the creator of Tiny Desk, about the 2022 contest, and asked him to provide some tips for Jacksonville artists preparing to submit their music.

This interview has been edited for length and clarity.

Bob Boilen, thanks so much for joining me. Let’s start with the big news. The Tiny Desk contest is back for 2022. Looking for unsigned bands to submit a performance video of an original song, for their chance to perform their very own Tiny Desk concert. You’ve been accepting invitations since February 8, and will continue to do so until March 14. So what else is new this year to the Tiny Desk? And what are you excited about this year?

Well, always, I’m excited for the next video I’m about to watch because I have no idea like, am I going to see the next amazing artists that I’m going to fall in love with? That’s the thrill of it. You just don’t know, there’s so much talent in this world. And in this country in particular. That’s the joy of it –– it never gets old.

Also there’s a tour for some of the winners this year, right? And some of the standout videos, those performers will be invited on tour as well?

Yeah, the winner comes and plays a Tiny Desk at NPR in Washington. So there’s that. And then we go out on tour with them to five cities. And each of those cities, we try and have artists who submitted to the contest to play on stage, as part of that evening of presenting the winner. So there’s lots of exposure, you know, that most of us –– no matter how much of a music fan you are –– don’t know the amazing talent that’s even in their neighborhood. And so when we do these tours, that’s one of the cool things is, we’ve seen musicians who met each other on these evenings from different bands, who then got together and made projects together. I mean, it’s really just, it’s about forming community. And we truly love that part of it.

Absolutely. And again, you’re looking for unsigned artists to submit. As the host of All Songs Considered, we know you’re supremely genre agnostic. And looking at past contests from last year’s winner, singer-songwriter Neffy, to the New Orleans funk-hip hop-fusion act, Tank and the Bangas. No one, no matter what kind of music they play, should be discouraged to enter. So for musicians here in Jacksonville, any tips for preparing their entry? Can you over produce these videos? What are some things that you’ve learned? Some sage advice?

The production is not important. Both the video production and the audio production, we see the talent. We want your talent to come through. And the Tiny Desk Concert series is about intimacy. It’s not about what you can do in a recording studio. It’s the opposite of that. It’s being raw and emotional and powerful. With fewer tools, not more tools. It’s not about the lighting that your friend can do. It’s not about any of that stuff. It’s really about doing something from your heart, something you’re proud of. And just sending it to us. I mean, our judges are Michelle’s Zauner of Japanese Breakfast, Raveena, Big K.R.I.T., iLe –– these are all very different artists. We try, when we watch these things, just to see the talent, not the tastes of music that we love. So don’t be discouraged if you’re, as we’ve had, an 84-year-old banjo player, or an 18-year-old piano player, or a budding opera singer, or whatever.

Yeah, that’s a stacked panel of judges. And I read there have been 35,000 entries over the course of this contest –– in the course of all the contests over eight years, right? That’s a lot of music.

We have a good team that, including myself, that goes through these videos and tries to find the most talented. But even the person out there who’s not a musician, can go to npr.org/tinydeskcontest and start watching these submissions and get turned on artists and do what we do, which is just watch the videos and look for talent. It’s really fun.

And you touched on sort of the intimacy of the Tiny Desk. Performance videos and the Tiny Desk has really become kind of this cultural phenomenon. It’s fairly simple concept. You invite artists in to perform songs that all songs considered desk right? Your office, essentially?

Really my desk at NPR. NPR Music has a big open space. I have a desk with a bookshelf of paraphernalia behind me. Mostly the many things behind there are things artists have left over the years. And it’s a small space. It’s not even the size of most people’s bedrooms.

It’s become a very recognizable backdrop over the years. Any idea why, with basically the entirety of recorded music at people’s fingertips and through streaming services and concert footage on YouTube, the Tiny Desk has connected with people in the way that it has?

I think the main reason is that, when they come to play behind my desk, the artist is being challenged to do something a little outside their normal box. And so they’re playing in a room full of NPR employees, their voice is not being amplified, it’s the middle of the day, there are no lights, it’s often just sunlight. You know, unless there’s a huge storm, we don’t turn on any lights. And it strips away all of those things –– the crutches that musicians are so used to, the in-ear monitors or the reverb on their voices. We take all that away. And so the talent just comes through. And that’s what we look for. And so the musicians themselves are challenged, they wind up really happy about it, they do something different. The listener who’s maybe seen and followed this artist for 10 years or is brand new to them, they see something that they will not likely see again from this artist. And so everybody gets something that is exciting to them, or at least that’s the desire and the hope.

I definitely think you’ve achieved that. And I, personally, have some favorite moments of my own or memorable ones. You know, when someone on your staff asked one of the Avett Brothers (Scott or Seth) if they’d swallowed an amplifier. Or when Jeff the Brotherhood, they they were drinking PBRs or something, and rip their shirts off. And you had the cast of Sesame Street. I’ve watched that with my daughter several times. She loves that. Is there a performance or a moment? In your mind? I’m sure there are several but one that kind of typifies what the Tiny Desk is all about to you.

It’s so hard. I was just talking to someone else recently about the Cat Stevens concert because Yusuf Islam is just, as a kid growing up, I bought a guitar at the age of 15 listen to his music hoping to play like or sing like him. I asked him to come play. And I don’t usually request artists to do a song but I asked him to do “Father and Son” and Cat Stevens was there with his son, who was standing by me when he did that. And it brought tears to my eyes. But then again, there’s so many things like that. We did a Tiny Desk concert with Wilco on a Saturday morning and had kids come in and so here are all these little you know five, six, seven and eight year old kids in the front, their parents are further back in the office. And there’s Wilco playing. And what a joy it must be for Wilco, who’s going to be playing a nightclub that night with lights and so forth in their faces. For the most of these kids, it was their very first concert. And the looks on their faces brought so much joy to Wilco. I love that kind of stuff.