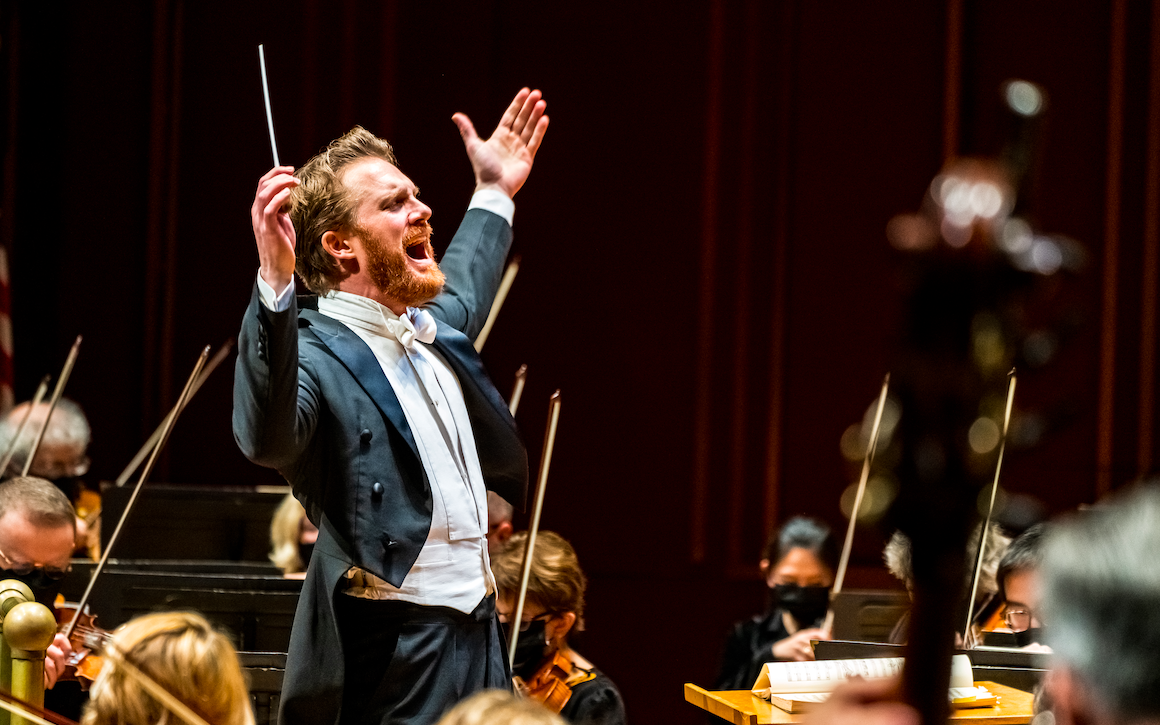 The Jacksonville Symphony will soon wrap on its first full season since the pandemic’s peak. And what a year it’s been.

This was also the symphony’s first full season without the late Robert E. Jacoby (1928-2021) — an Eagle Scout, an Army tank commander and one of the key philanthropists in Jacksonville’s history. His influence could be felt in places as diverse as the Jacksonville Zoo, the Cummer Museum of Art and Gardens, the University of Northeast Florida and especially the Mayo Clinic, where the hospital’s Monica and Robert Jacoby Center for Breast Health is saving lives, every day.

Jacoby was also a key patron of local creators. So much so the symphony’s home turf, Jacoby Symphony Hall, is named after him. (He was also a longtime supporter of WJCT Public Media.)

Jacoby died last June. And the 2021-2022 season was held in tribute to him. He would be proud, but not surprised, because he was their most passionate advocate of all.

As the Jacksonville Symphony’s 2021-2022 season comes to an end, let’s take a quick look back at a very successful season, and point out your last few chances to see them before summer break.

Symphony In 60 Continues to be a Hot Ticket

The Jacksonville Symphony can take pride in having not only emerged from the pandemic in good shape, but arguably in better shape than ever before. As it’s been often noted here and elsewhere, a big part of the symphony’s success in this era, under the leadership of Music Director Courtney Lewis and Music Director Tony Nickle, has been their zealous efforts to get their brand out in front of people who might not normally consider themselves part of the target market for classical music. These efforts have paid off nicely: 16% of the tickets sold this year were sold to first-time attendees. That ultimately helped translate to more than 300 new season ticket-holders.

A big part of that sort of community outreach has been the Symphony In 60 series, sponsored by PNC Bank. Ticket purchases include a drink ticket, good for a high-end cocktail during the reception period before the show. The series is designed explicitly to create networking opportunities, and you’ll often see corporate folks entertaining clients and colleagues. The actual concert only lasts about an hour — perfect for symphonic-newbies to sample the atmosphere and the acoustics, while being over and done with in plenty of time to grab food and drinks in the city’s downtown.

In this sense, the symphony is following up on efforts previously made by legends like Leonard Bernstein, Glenn Gould and Yehudi Menuhin, who all rebelled against the general perception that the classics are for old people. Indeed, the history of classical music has always been decisively and explicitly influenced by the youth, whether as instrumentalists or composers.

The final Symphony in 60 of the season takes place on May 26, on a night where a performance of Piotr Ilych Tchaikovsky’s “Romeo and Juliette Overture-Fantasy” will resonate even more deeply, as the symphony celebrates with Pride Night at the Jacksonville Symphony.

Festivities will begin with cocktail hour at 5:30pm. There will also be a 50/50 raffle, with all proceeds going to JASMYN, one of the city’s leading advocacy organizations for LGBTQIA+ youth. They will, in turn, route all funds received from the symphony to its Youth Pride Fund, which administers some of their most popular initiatives, including the Summer Art Series, the Storybook Prom and the organization’s float in the iconic River City Pride Parade.

Wolfgang Amadeus Mozart (1756-1791) is arguably the single greatest child prodigy since Jesus Christ himself, and that’s no wild hyperbole. Indeed, some of the most essential liturgical music ever written was Mozart’s work (that’s a discussion for another day, however).

Music Director Lewis, at 38, is already seven years older than Mozart was when he died. It’s a useful question to ponder: How many artists produced more work of such great quality, in nearly so short a period of time? Van Gogh? Charlie Parker? Jimi Hendrix? Nope. Mozart’s was a singular case of genius in all of human history. Scientists still have no clue how it happened, and philosophers have no reason why it happened. All we can do is listen, and learn.

Mozart was featured five times in this season’s Florida Blue Concert Series and once in the Raymond James Coffee Series, while the David M. Hicks Piano Series brought five young pianists (Alessio Bax, Jonathan Biss, Simone Dinnerstein, Daniel Hsu and Conrad Tao) to do a series of ten concerts of Mozart’s piano music from September 2021 through May 2022. Dinnerstein performs with the symphony on Friday, May 20 and Saturday, May 21.

Wrapping up With Pride and Pop

Always rebels always looking forward, both Mozart and Tchaikovsky would surely be thrilled to know that their work was being played in this kind of setting, by the dominant cultural institution in front of a crowd spanning every conceivable demographic. It’s the kind of audience that’s diverse not in spite of the occasion, but because of it. (Tchaikovsky, having lived openly gay in Tsarist Russia, might appreciate it even more.)

The weekend of June 3 and June 4 features a tribute to an LGBTQIA+ icon of a more recent vintage, the late great Freddie Mercury, when Brent Havens leads the symphony through two sets of classics by Queen. It’s the final installment of the Fidelity National Financial Pops Series, which did ten concerts this season. The rock component is provided by a six-piece band called Windborne. The group’s lead singer, MiG Ayesa, a veteran of the musical stage on Broadway and London’s fabled West End, will be hot stepping into Mr. Mercury’s massive shadow as the lead vocalist; that’s a challenging task for anyone, anywhere.

A Grand Finale (In D Minor)

The symphony’s final weekend of the season features one of the all-time great show-stoppers in the entire history of music, the “Symphony in D minor, Op. 125” (1824) by Ludwig Van Beethoven. Beethoven (1770-1827) is, by unanimous consent, the boss of bosses among composers of all types, and the standard by which pianists, in particular, will always be judged. This piece was inspired, in part, by a poem by Friedrich Schiller from 1785, from which Beethoven drew upon for the song’s iconic fourth movement, which is instantly recognizable throughout the western world.

On that same weekend, the city marks its official celebration of the 200th anniversary of the founding of Jacksonville. #Jax200 will include a day-long block party and music festival on June 11 that encompasses James Weldon Johnson Park, Riverfront Plaza and the length of Laura Street connecting the two. That’s right next to Water Street, where the symphony will be playing on June 10 and 11. The streets will be packed on Saturday, in particular, and there’s plenty of time to get one’s fill of everything going on.

By the time the symphony plays its final show of the season, they will already be well on the way toward preparing for the next one. While celebrating the organization’s past, they will also be pointing toward their future by opening the show with a new, original commission: “Trances” by Tarik O’Regan, the first in a multi-year series of six new works by fresh new composers, drawn from around the world and meticulously curated by Lewis and Nickle. They plan on debuting the next piece, by Sean Shepherd, sometime in May 2023.

The symphony is leaving everything on the field here, with roughly 168 performers on stage during the night. The full Jacksonville Symphony will be augmented by the Symphony Chorus and four of the country’s most in-demand operatic vocalists: soprano Elaine Alvarez, mezzo-soprano Tamara Mumford, baritone Anthony Clark Evans, and tenor Cooper Nolan. This is arguably the greatest piece by the greatest composer, performed by a souped-up deluxe version of what already is one of the very best orchestras in America. It’s a no-brainer.

The event marks the 12th and final installment in the Florida Blue Concert Series, and the end of the symphony’s 73rd season. What better way to express the exultation from triumphing over all the challenges of the past couple of years than with a piece best-known as the “Ode to Joy”? They’re always mindful of little details like that.

For a full list of remaining performances, as well as the symphony’s 2022-2023 season, head over to the Jacksonville Symphony‘s website.