The JME team picks the records that have made our year 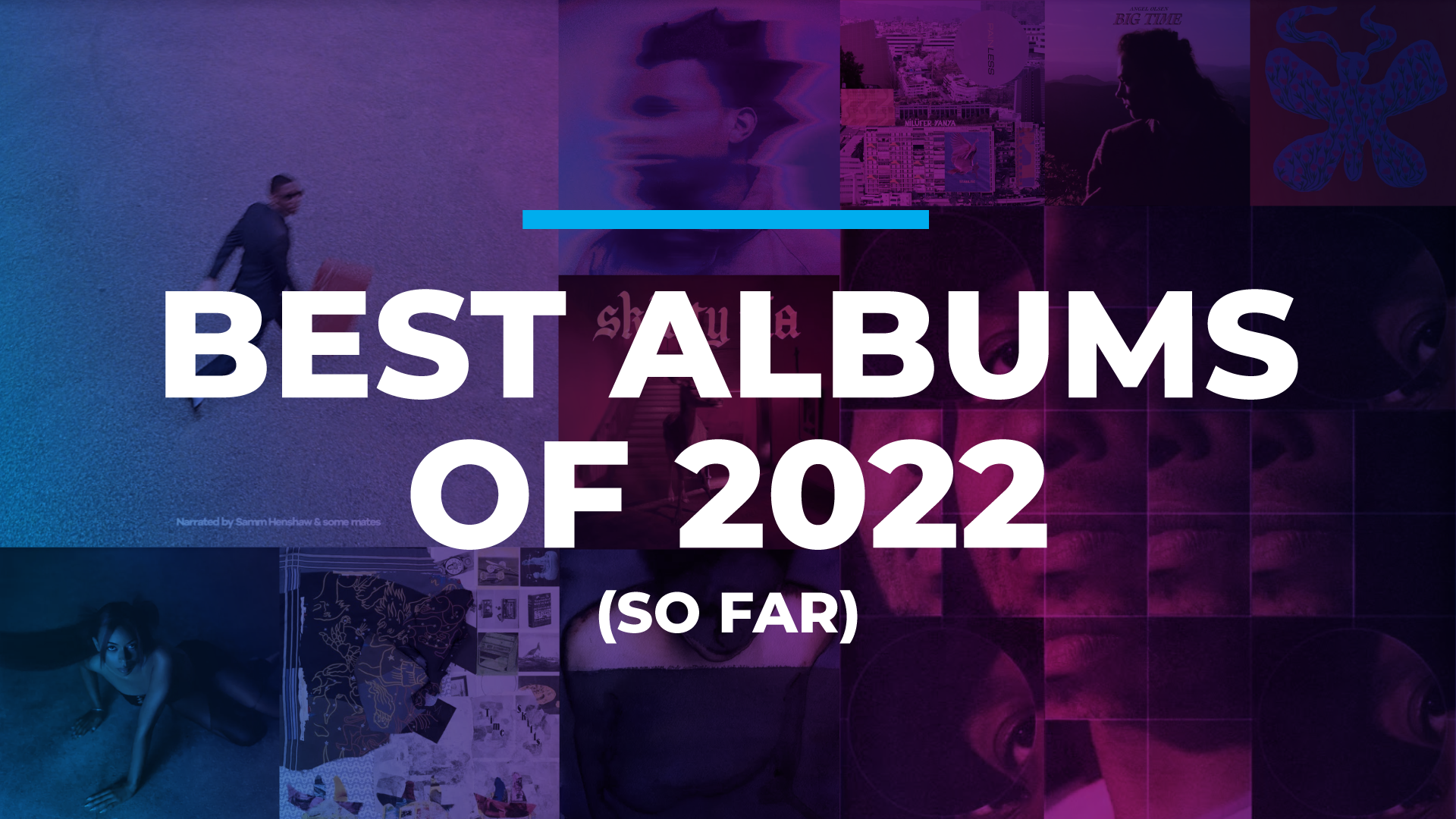 We’ve written about a lot of music this year. More songs and records than we can count. We’ve listened to even more.

Just a touch past the halfway point of 2022, the JME team decided to take stock of what we’ve heard so far. The resulting list — The 22 Best Albums of 2022 (So Far) — just scratches the surface of what we’ve added to rotation on  The Independent 89.9 HD4. But for those who want to put their ears on the best new music, it’s a solid start.

Here’s a crash course on the best music of the year, so far.

Ravyn Lenae has had me in a chokehold since her song “…Sticky” appeared on the third season of the HBO series Insecure back in 2018. Since then I’ve gorged on her other EPs. Lenae’s debut album Hypnos proves difficult to pigeonhole. Calling it an R&B album would be doing it an injustice, especially with Lenae’s diverse production choices made in tandem with long-time collaborators, including Steve Lacy, Sango and Kaytranda. The album includes atmospheric ballads, reminiscent of Raveena and FKA Twigs, whispers of Janet Jackson and afro-beat fueled electro-pop.–Toni Smailagic

Country Music documentarian Ken Burns is likely a fan of Angel Olsen’s latest full-length, as the chameleonic Asheville singer-songwriter deftly takes on, as Burns might put it, “the four letter words” that all good country music tackles. On Big Time, Olsen sings of pain, hurt and love over watercolor smears of pedal steel, subtle rim shots, and a big and tasteful brass section.–Matthew Shaw

Best Song: “All of the Good Times”

Activist-hip-hop artist Linqua Franqa moved quickly from college-days poetry slams to dropping a slam dunk on what she viewed as played-out and stagnant community politics. Franqa (aka Mariah Parker) is arguably the only current firebrand rapper who is also in their second term as a county commissioner (in this case the state of Georgia’s District 2). Their latest release, Bellringer (which literally doubles as Franca’s Ph.D. dissertation) is 13 tracks of spitfire, cerebral lyricism and woozy production that opens minds on the dancefloor.–Daniel A. Brown

Skinty Fia, named for an Irish slur that translates to damnation of the deer, is a welcome character arc for the group of Irish lads whose post-punk revival could have taken a turn toward football-hooliganism-style anti-enlightenment. Instead, it embraces a rough and tumble heritage while leaning into tenderness. It’s a record suitable for both looking for trouble and curling up at home into a moody summer ball.–Glenn Michael Van Dyke

One of the most sought-after collaborators in contemporary music, classically-trained pianist Robert Glasper has been everywhere in 2022 (including the Jacksonville Jazz Festival). On the monumental Black Radio III, Glasper conducts an orchestra-sized collection of chart-topping contributors, including H.E.R., Tiffany Gouché, Ty Dolla Sign, Yebba, D Smoke, Q Tip, India.Arie, Big K.R.I.T. and more on an album that’s introspective and uplifting throughout.–Matthew Shaw

Arriving in the early part of 2022, Melt My Eyez See Your Future has kept Denzel Curry’s name and emcee credibility relevant in the Twitter streets —  mostly hushing all doubters. Soulful but sharp production heightens Curry’’s delivery and accentuates his introspective messages. On the flip, the Florida vibes and cadences remain intact. Contributions from Robert Glasper, T-Pain, Karriem Riggins, JID and more made Curry’s one of the most talked-about projects of the year so far.–Al Pete

What happens when you combine guitars treated á la The Cure and classic London breakbeats? Turns out it’s a feel-good fusion of singer-songwriter tunes, R&B, punk and whatever secret seasoning Nilüfer Yanya tossed in there to make Painless entirely original. Yanya’s deep and slightly husky voice takes us on an alluring ride of self discovery, the whole record sounding as if Jewel ditched her acoustic guitar for a cafe racer and said “Get on, bruh, we’re going to a rave.”–Glenn Michael Van Dyke

Nu-folk songwriter Aldous Harding dives into the deep end of the avant-garde pool on Warm Chris, submerging listeners with her unusual ideas, while offering much to grab onto. Consistent with previous albums, Harding’s scattershot ideations are resistant to straightforward summation. Her mesmerizing vocals, ranging from plangent to piping, float to the surface atop a variety of brassy horns, brisk piano and brightly picked bass. Warm Chris is the most vivid reflection of Harding’s prowess as a singer-songwriter, showing off her ability to fluctuate between sprechstimme (am I allowed to use this for non-german music?) on songs like “Fever” and depressingly dramatic ballads like “She’ll Be Coming Around The Mountain.”–Rain Henderson

Though it dropped in mid-2021, Allison Russell’s debut solo effort Outside Child continued to gain notoriety and earn the singer-songwriter highmarks, especially after the autobiographical single “Persophene” began popping up on AAA-radio playlists across the country. Like her fellow Canadian, Neil Young, the Montreal-born Russell proves that the best Americana can emerge from outside US borders. Among a peer group of folk, country and Americana artists — Amythyst Kiah, Rhiannon Giddens, Joy Oladokun, among others — Russell is one of a growing number of Black female artists reclaiming the genre.–Matthew Shaw

Their identities shrouded in mystery, Sault are essentially faceless. A pretty incredible feat in this era of face-favoring social-media algorithms that drive us increasingly towards self obsession. Air, the collective’s sixth album in four years is a contemporary classical offering that invites a slow, intentional listen. Almost entirely instrumental, the album is composed of orchestral and choral arrangements that will turn your ordinary morning commute into a scene suitable for the silver screen.–Glenn Michael Van Dyke

The music of keyboardist-vocalist Anna von Hausswolff deals in the malleability of fragility and fury. The Scandinavian composer and her longtime band have released consistently engaging, vulnerable, forceful, and downright terrifying music. The performances on Live at Montreux Jazz Festival find von Hausswolff and her band unfurling the music like fog: previous studio tracks like “The Mysterious Vanishing of Electra” and “Come Wander with Me/Deliverance” are given their full measure and impressive reinterpretations to writhe outward from a drone of organ, bowed bass guitar, reverb-drenched guitar, and molar-removing drum pummels.–Daniel A. Brown

On Glass Effect, multi-instrumentalist Ben Marc draws on influences both vast and varied. A hybrid of electronic, hip-hop and classical, the record finds its motivic footing in everything in between. The song “Mustard” unfurls like a dramatic film score with abstract splashes of strings, percussive samples and a hypnotic guitar lead. Meanwhile “Jaw Bone” finds common ground between the digital atmospherics of house music and the more-analog landscapes of Latin jazz.–Matthew Shaw

Sunni Colon’s debut studio album comes after releasing two EPs (Thierry Disko and Satin Psicodelic). It’s easily one of the most slept-on albums of the year. With heavy comparisons to Frank Ocean during Ocean’s EP era, Colon truly found his footing on JúJú & The Flowerbug, creating a sonic daydream that transitions from funky basslines and groovy guitar riffs into romantic melodies and electro-jazz experiments.–Toni Smailagic

Irish shoegazers Just Mustard create a compilation of textural noise on Heart Under, sucking oozy inspiration from 80s sludge-rock. Contrary to their previous record, Katie Balls sings throughout the entire album, her unearthly vocals swinging through dueling layers of guitar distortion like a sledgehammer dismantling the industrial complexity surrounding her darkest thoughts. Never fully escaping the pain, the record is a sinister introspection guided by guttural tones and masterful superimpositions.–Rain Henderson

“If you survived last year put your hands up” might be the most morbid lyric ever meant to encourage audience participation. But so goes the laundry list of poignant lyrics on EARTHGANG’s “All Eyes on Me” from the Atlanta duo’s breakout album Ghetto Gods. Known for their preference for warbly production and distinctive wordplay, on Ghetto Gods, Olu and wowgr8 take aim at something greater than themselves. It’s a commemoration of how their own community held itself together through tough times. But, perhaps more relevant to a broader audience, Ghetto Gods is a moving celebration of life.

This impressive 29-track boxed set features recordings of saxophonist Albert Ayler recorded four months before his early death at age 34. In a handful of years, Ayler had elevated, if not disrupted, the NYC music scene and pushed the “freedom” limits of free jazz. Recorded to stereo by the ORTF (Office de Radiodiffusion-Télévision Française) on July 25 and 27, 1970, at the Fondation Maeght arts center in  Saint-Paul de Vence, France, in front of an audience of 1000-plus fans and neophytes alike, Ayler is joined by a group of assembled players that were mostly unfamiliar with his last compositions. Ayler (tenor and soprano sax, vocals) leads and urges vocalist-soprano saxophonist Mary Parks, pianist Call Cobbs, bassist Steve Tintweiss, and drummer Allen Blairman, through a total of four hours of resulting music that reminds that Ayler’s esoteric mixture of folk-form motifs, of militaristic marching revelry, and weeping Pentecostal homily, remains as vital as it was a half century ago.–Daniel A. Brown

-Listen to Revelations on Bandcamp

On Present Tense, Kiwi alt-pop band Yumi Zouma proves that with just the right amount of synth and major-chord progressions, the classic guitar-drums-bass combo retains its ability to move — both physically and emotionally. Full of retro, ’80s-eque bops and introspective power pop, Present Tense is deserving of its current ubiquity.–Matthew Shaw

Tedeschi Trucks Band, I Am the Moon (Fantasy Records)

After garnering a scad of awards, including a Grammy, and constructing and continuing to guide and reframe the contemporary jam band/jazz/blues diaspora, what is there left to do? With their most ambitious project yet, Tedeschi Trucks Band are at the halfway-point of releasing their four-part concept series, I Am the Moon. A logical blend of the two leaders and their backing band’s influences and approaches — Coltrane, pre-war blues, soul and a cauldron of global music —  the albums are inspired by the love poem Layla and Majnun; penned by 12th-century Persian poet Nizami Ganjavi and the same work that inspired Clapton a half century ago.–Daniel A. Brown

-Stream I Am the Moon

The Smile, A Light for Attracting Attention (XL Recordings)

With The Smile, Radiohead song-crafters Thom Yorke and Johnny Greenwood have written an eclectic suite of approachably experimental tunes whose less-than-subtle social commentary is no less than on-point. From the spitting post-punk of “You’ll Never Work in Television Again” to the cinematic electro funk of “The Smoke” to the eerily baroque “Free in the Knowledge,” A Light for Attracting Attention contains multitudes.–Matthew Shaw

-Stream A Light for Attracting Attention