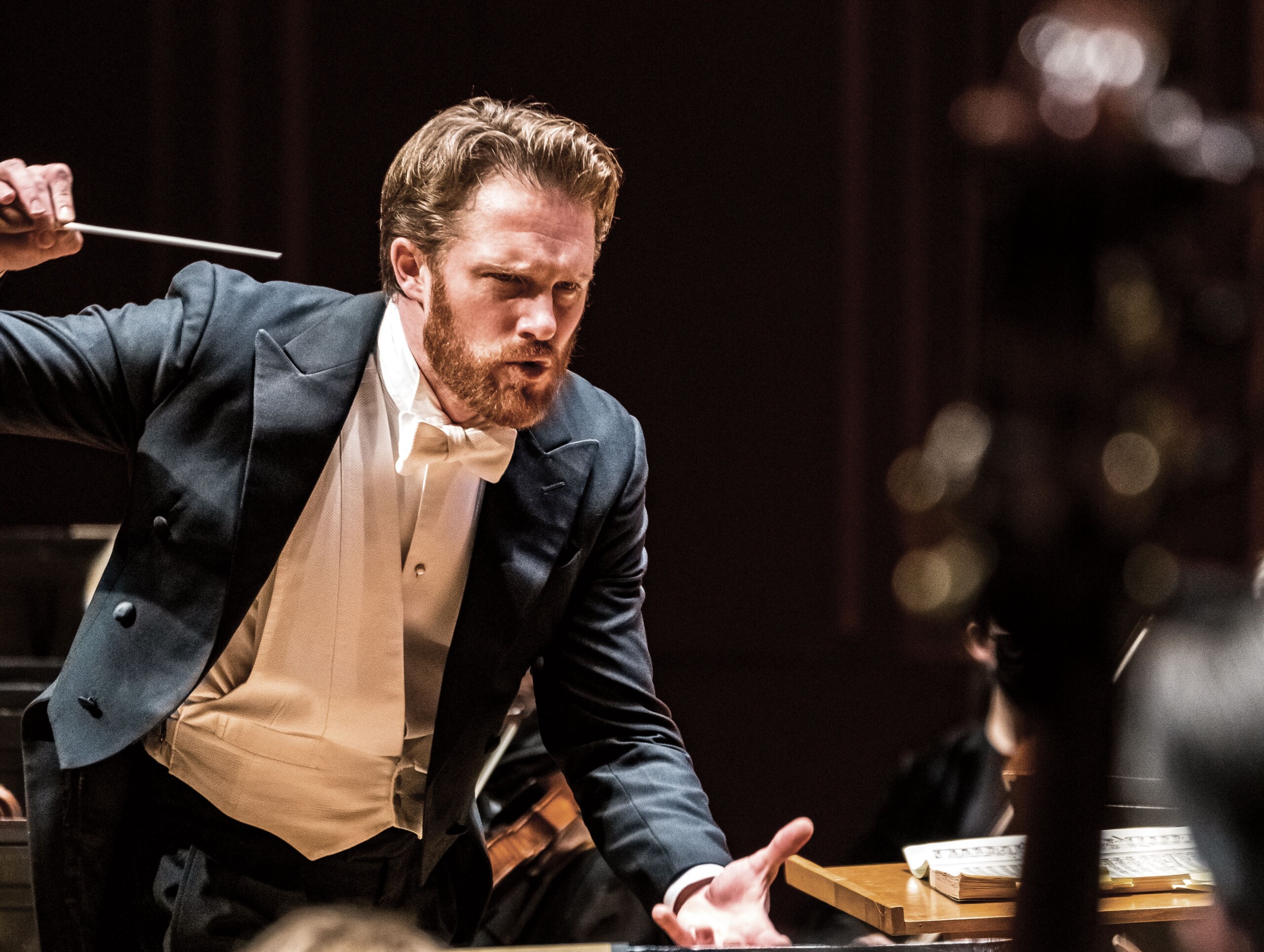 It was a hot, rainy, muggy Monday afternoon in Jacksonville, but the weather was perfect in Los Angeles, where Jacksonville Symphony Music Director Courtney Lewis found himself touching down on Sunday, August 22. Lewis was in the thick of preparations for the symphony’s 2022-2023 season, when he was asked to step in for a special guest conducting gig with his friends at the LA Philharmonic. The concert, on Thursday, August 25 is held at the legendary Hollywood Bowl, site of countless classic moments in music history.

“It came about because the conductor who was scheduled for the engagement (Marta Gardolinska) got covid,” Lewis said via telephone from his Los Angeles hotel. He sounded still slightly breathless from his arrival, but it’s sometimes hard to tell between that and the natural enthusiasm he brings to everything he does.

“I was on vacation at Fire Island, so this was on Saturday. I was lying on the beach when I got the phone call, to see if I could arrive on Sunday. I flew out there Sunday night, with a suitcase full of t-shirts and shorts. No conducting clothes–no batons, no scores. The music was waiting for me at the hotel, so I just stayed up all night, learning it.”

Luckily, he was already familiar with the material, or the assignment would have been simply impossible on such short notice. “I had the first rehearsal this morning,” he says. “So, all very last-minute, but quite exciting.”

Lewis helms the LA Phil for a programme built around the work of German composer Clara Schumann (1819-1896) and Czech composer Antonin Dvorak (1841-1904). The concert opens with “The Hebrides” (Fingal’s Cave), written by Felix Mendelssohn (1809-1847) in about 1830, before shifting into Schumann’s “Piano concerto in A minor, Op. 7” (1836). This first half of the show features the dynamic young Isata Kanneh-Mason on piano. The entire second half of the programme is devoted to Dvorak’s “Symphony No. 7” (1884), which clocks in at about 40 minutes.

“I would never agree to come in this quickly, unless I really did know the music well. There wasn’t much time to even really look at the music. I would be very reluctant to do it without at least a week’s notice, or even longer. You know, it takes a long time to learn music, and I’m lucky that the repertoire is stuff I’ve done many times before. That doesn’t make it any easier to jump in. I’m lucky now to have a couple of days off before the concert, so I can study like crazy, but that’s only possible if you know the music well.”

Kanneh-Mason is a rising star in the classical world, one who has already made waves in the industry, only a couple years out of the Royal Academy of Music. Lewis had just met Kanneh-Mason that morning, but he was already well-acquainted with her work, as any serious classical fan must be, by now. If not, they certainly will very soon.

“She’s from an amazing family of British musicians,” says Lewis, “a number of brothers and sisters who are classical musicians. There’s actually an amazing documentary about them on the BBC; I watched it last Christmas with my own family.”

Both soloist and guest conductor are rising stars in their industry, and both are looking forward to working with each other this week.

“She plays in a wide variety of genres of music,” he continues. “She plays lots of classical music, but she also does a lot of crossover stuff; she has much less of the hard boundaries toward different styles of music.”

You can hear Lewis slipping into the vigorous, expository style that Jax Symphony fans have come to appreciate; now, as always, you can hear his passion for the work, and more importantly, for the people he does that work with.

“I would never agree to come in this quickly, unless I really did know the music well.”

To be a classical conductor in 2022 requires a lot of aggressive advocacy for the genre’s relevance, and that has been a key accomplishment for Lewis and his team.

“What I admire about this particular programme is that she is an exponent of Clara Schumann,” he says. “She was one of the most famous pianists of her day. She was actually much more famous than her husband, Robert, during her lifetime. This is a piece that she composed when she was only 14, and it’s an example of a piece that hasn’t been played as much, because of the prejudice against women in the past. Isata is doing a wonderful job of challenging those assumptions, and letting us hear music that was excluded from the canon in the past. It’s been a pleasure to get to know this piece, in the process of preparation for working with her. I didn’t know very much of Clara Schumann’s music, and Isata has recorded a whole album of her music, which she plays very convincingly. She makes a very great case for the fact that Clara Schumann is a musician worth playing today.”

Kanneh-Mason finished a residency with the Royal Liverpool Philharmonic Orchestra earlier this year. Her debut album, Romance–the Piano Music of Clara Schumann (Decca, 2019) was about as big a commercial success as you can get with classical music in 2022, especially featuring such new talent. She notably drew over a million views of a Beethoven livestream, recorded at home with her family during lockdown. This is an achievement that Lewis can probably appreciate more than most, given his crucial efforts to stream the Jax Symphony around the same time.

The LA Phil currently thrives under the leadership of Gustavo Dudamel, who was only 28 years old when he took over in 2009. “About ten years ago, I was a Dudamel Fellow, conducting with the LA Phil, working with him,” Lewis recalls. “I think one of the most important things he’s done is kind of removed an age barrier from classical music. There are a lot of great young musicians coming up the ranks, and it’s wonderful that they’re being given a chance to work.” Dudamel follows in an illustrious line of legends that preceded him, names like Otto Klemperer, Zubin Mehta, Andre Previn and Esa-Pekka Salonnen.

The Los Angeles Philharmonic was founded by Williams Andrews Clark, Jr. (1877-1934), back in 1919. Its first music director was one Walter Henry Rothwell (1872-1927), who accepted the job only after Rachmaninoff turned it down, and who led the organization for its first eight years before dying prematurely. He was only 55, and it took some time to fill his shoes. It was Mehta’s star power that really brought them to prominence during his run in the 1960s and ‘70s.

The LA Phil’s primary venue is currently the Walt Disney Concert Hall in downtown LA, a 2,265-seat Frank Gehry design that opened in 2003. From 1964 to 2003, concerts were held at the Dorothy Chandler Pavilion, which sits next to the Disney, as part of the sprawling Los Angeles Music Center. But their real home, in the spiritual sense, is the iconic 17,500-seat Hollywood Bowl, where the LA Phil has held summer concerts since the building opened in 1922. In fact, this appearance by Lewis this week comes as the organization and the venue celebrate 100 years in business together. Women played a major role in the founding and development of what has long been one of the premiere cultural institutions in Southern California, which obviously has no shortage of iconic venues.

News of Lewis’ collaboration came as a surprise to everyone, including the man himself. “It’s a really big deal!” Even for a guy who’s always enthusiastic about his work, one could hear a clear upward shift in his pitch when he said that.

“The Hollywood Bowl is the best outdoor venue for classical music in the country. I have a wonderful memory of watching music at the Hollywood Bowl with my family, when I was 14, and I’ve been back here many times since.” He’s attended many shows, and seen the building from every angle, but this is his first time holding the baton on this sacred stage himself. “Every orchestra responds differently to you, physically, so you adjust your physicality,” he says. “I’m really enjoying being with a big orchestra this weekend. Sixteen violins, instead of twelve. It’s really nice, to have so much sound.”

But it makes perfect sense that an orchestra known as one of the world’s most forward-thinking would, at such a critical moment, seek out one of the most acclaimed conductors in the world. It makes further sense that the LA Phil did, in fact, play a key role in Lewis’ own professional development. “A lot of ideas for things that we’ve done in Jacksonville over the last couple of years have been things that I saw for the first time in Los Angeles,” he says. “For example, the way that we put on our operas each year, the symphonically-staged operas, with the stage built behind the orchestra at Jacoby Hall. It was a very inspiring time for me.”

Lewis’ triumphant return to LA also allows him the chance to catch up with his old colleagues at the LA Phil, many of whom were there during his fellowship there a decade ago. “There are lots of lovely, familiar faces,” he says, “and also people that have played in other orchestras I’ve played with in the past, who are now with the LA Phil. It’s really nice, the way you gradually begin to get to know people. It always helps to have a few familiar, smiling faces looking back at you when you meet a new orchestra. I’m looking forward to going out and getting a drink with a few of the musicians after the show, to see how much they’ve really changed in ten years.” The maestro will have a Hendricks and tonic.

After the show is done, Lewis will rise on Friday morning, and then fly back home to Jacksonville. Will he resume his vacation? Nope. Any thoughts of any beaches will have to wait until next year, unless they’re within driving distance. Thankfully, he has plenty of those to choose from.