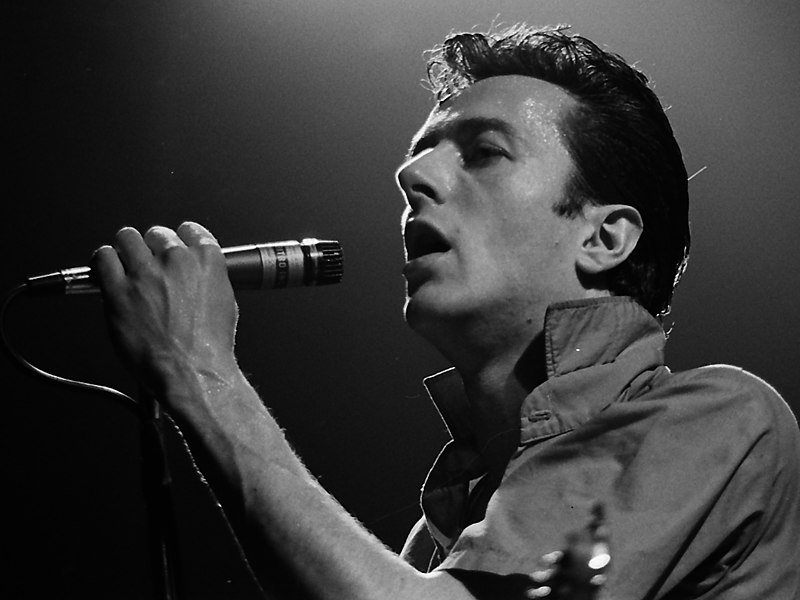 The Clash, the amorphous British punks, remain one of the most influential bands of the 20th Century. Beginning with the unhinged cacophony of the quartet’s eponymous debut, the group remained on the cutting edge of a fast-changing musical landscape, gorging on everything from reggae to disco to hip-hop with the same gusto with which they ingested amphetamines.

The Clash’s embrace of reggae, though, would become an archetype for independently minded artists for years to come. Similar to Kurt Cobain’s championing of little-known bands like The Vaselines and The Meat Puppets, The Clash turned their fans on to the work of Jamaican reggae artists like Junior Marvin and Lee “Scratch” Perry.

“It is different, but me like ’ow ’im feel it,” reggae superstar Bob Marley told music writer Vivien Goldman after hearing Joe Strummer sing Murvin’s “Police & Thieves” in 1977. “Punks are outcasts from society. So are the Rastas. So they are bound to defend what we defend.”

Strummer died in 2002. August 21 would have been his 70th birthday. To celebrate Strummer and the band’s championing of reggae, we’ve compiled a list of our favorite reggae songs by the UK punks. We’ll also be infusing some crucial Clash covers into our Reggae Sunday mix on The Independent 89.9 HD4 (every Sunday; noon-2 p.m.).

No surprise that one of The Clash’s best-known songs, and certainly its most popular reggae tune, was originally a Lee “Scratch” Perry production. With violent guitar stabs and Strummer’s hoarse growl in place of Murvin’s tender falsetto, The Clash’s version is undoubtedly rougher around the edges. The band does its darndest to hit the high notes on the group vox response “Oh yeah.” What they lack in harmony, though, they make up for in devoted enthusiasm for the original. A tribute to Murvin, yes. Also an allegory for The Clash’s overall approach to making music.–Matthew Shaw

Arguably one of the Clash’s greatest compositions, Joe Strummer’s roman a clef is a potent celebration of real reggae and brutal takedown resulting in experiencing a night of bunk Jah at the titular, historic London dancehall. Strummer slags the three-band bill of being “four tops all night” and issues a clarion call for racial harmony (“White youth, black youth / better find another solution…”) as the street-level remedy to the empire’s societal woes; and in four minutes offers a field report that is one part revolution anthem, one part reggae-as-religious experience born out of a bad gig.–Daniel A. Brown

This gem from London Calling, combines the Clash’s love for authentic Jamaican roots-rock and a variation on the Bo Diddley beat that drove much of their holy frenzy. Rudie, the everyman rude boy of the world, is torn between “drinking brew for breakfast” and getting unsolicited life advice by his elders. The takeaway? If you don’t sell out, the unknown surpasses the certainty of 9-to-5 conscription. Solid wisdom, hard to live.–Daniel A. Brown

The Clash’s insatiable consumption of popular culture (and ambition) was perhaps best expressed on the 36-track triple-LP Sandinista! Having spent time in New York City as hip-hop was vibrating the city’s underground arts scene, The Clash wrote and recorded the Grandmaster Flash-inspired “The Magnificent Seven.” A revolution in popular cinema was also underway, and Francis Ford Coppola’s dark and allegorical Apocalypse Now left an indelible imprint on Strummer, who turned a memorable line uttered by Robert Duvall’s character into both an indictment of modern imperialism and an ambient, groove-heavy reggae tune.–Matthew Shaw

Although the love of the Clash for reggae was sacrosanct, during their tenure at uplifting global rock they stayed tapped into the current. Their cover of Willie Williams’ 1977 Studio 1 cut keeps the original’s loopy-rhythm and protest lyrics intact but adds tougher guitar jabs—including the tasty addition of a Coral sitar guitar—and ramping up the BPMs to a decidedly UK boots-on-the-bricks tempo. While the Clash were arguably a “positive-tip” band, Williams’ original gave them the chance to flex their eschatological/end-times muscle.–Daniel A. Brown