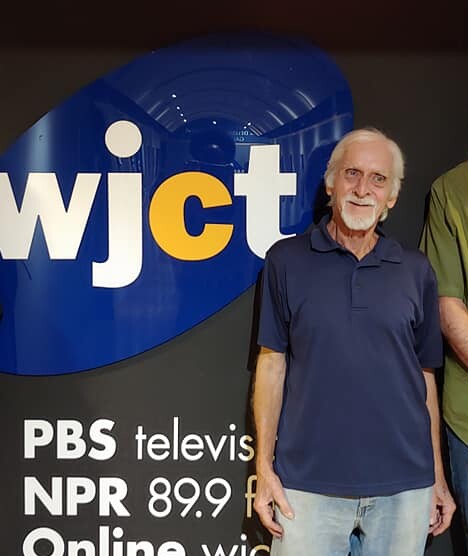 The world has grown a little darker with the recent passing of Richard Borders. For more than a half century, the Northeast Florida resident was a proud member (and storied survivor) of the mid-20th-century counterculture. A childhood fan of the phantasmagoric and horror films, Borders was a pioneering artist who worked in the nascent psychedelic light shows of the 1960s, eventually lighting up some of the biggest names in rock including The Who, Jimi Hendrix, and the Doors, and was on-set at both Woodstock and the Altamont Speedway Free Festival. As the live-music industry became flush with even pricier large-scale productions, Borders adapted with the times, working for Pink Floyd, The Rolling Stones, Paul McCartney and U2.

Along with light-as-art production that continued onward with his Gemini Light Show company, his decidedly esoteric passions included Edgar Cayce, Kripalu yoga, Kirlian photography, and “consciousness” in general, and he remained a champion of Jacksonville musicians and the overall cultural community here.

“I adored Richard. He was somewhat otherworldly. There was a mystical aura to him and we had many conversations over the years about spiritual matters, in addition to talking about music, his crazy times designing light shows for mega bands like The Who, and his support of emerging new artists like Jacksonville’s Madison Carr.

“The main thing I loved about him was his enthusiasm and positive spirit. He always had a twinkle in his eye and an upbeat attitude. For a while he shot video segments in our radio studio for TVJax. It was so much fun working with him and all of us at WJCT deeply mourn his passing.

“May his memory be a blessing.”

“Richard will be greatly missed. He was a major part of Jacksonville’s music community.
He mentored the young musicians and regaled the older folks with his music stories, memories, and wild adventures.

“Thank you for bringing the lightshow to rock and roll concerts and your light will shine on brightly forever.”

I met Richard Borders in the formal setting of interviewing him for a feature story some four years ago. Tellingly, he requested we meet at the highly informal setting of a local sensory deprivation tank center. He began recounting his story seemingly as we first introduced ourselves and shook hands. We spoke for hours and he was a torrent of anecdotes, a welcoming, psychedelized twinkle in his eyes, generous with his experiences and run-down of a life that took him from manipulating primitive oils-and-lights on an overhead projector at the Fillmore East, to being involved in multimillion-dollar global tours.

Once our conversation ended and I shut off my digital record, a second conversation began, me frantically hitting “record” again to capture the next wave of stories and claims.

As an alleged journalist, my sole obstacle in assembling the hours of recordings and the photos, handbills, and ticket stubs Borders graciously sent me was in confirming the authenticity of some of his stories. Particularly in regard to the ‘60s, there is a wellspring of verifiable information on an entity like the Grateful Dead; yet the blunt reality is that the idea of then-documenting the minutiae of a light show, let alone the various, red-eyed giggling people working behind the scenes, probably “slipped the minds” of most participants. Yet during our talk, my doubts would be quelled when Richard would describe in sagacious detail the bulb wattage and series wiring of some one-off Yardbirds gig he had worked.

If history is written by the victors, the history of the 1960s counterculture is arguably written by those with a surplus of brain cells; Borders had plenty of those, and his vibrant presence will be missed.

In a memoir essay Richard gave me back then entitled See the Music, he described his ethos and reads a fitting encapsulation of his life and art:

“There are quests which we have as we spend our time on Earth. These are Dreams, Love, Hopes, and the quest for our own Physical, Mental, and Spiritual evolution. Whether you are aware of them or not they exist.  The four I have chosen were:  To ride the perfect Wave, the search for Love, the evolvement of my soul, and to SEE THE MUSIC. This seems to be the most interesting to those who have heard my tales and adventures.”