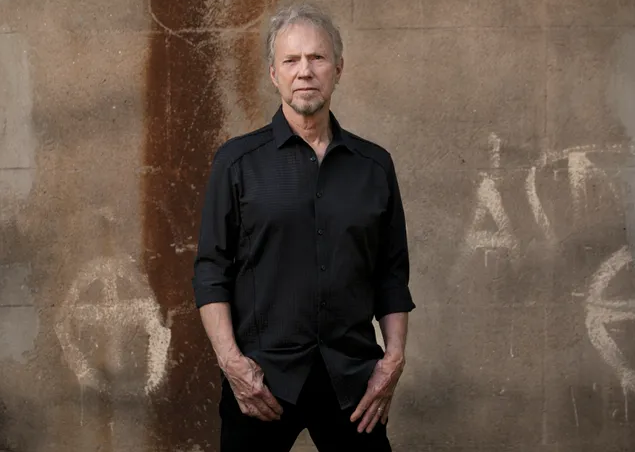 While barely in his twenties and fresh from dropping out of a college career studying religion and psychology, Randall Bramblett made his recording debut in 1970 with Goose Creek Symphony. Considering how esoteric and indefinable that particular drugs-meets-jug-band group were, it was an auspicious beginning for the young multi-instrumentalist whose career remains inventive and unpredictable.

In the fifty years since, as a sideman Bramblett has worked with dozens of artists including Gregg Allman, Sea Level, Levon Helm, Widespread Panic, while maintaining a longtime association with Steve Winwood and Traffic. The Georgia-born-and-based Bramblett has also enjoyed an impressive career as a singer-songwriter. Peers including Delbert McClinton, Hot Tuna, The Blind Boys of Alabama and even Deep Purple have all sung Bramblett’s songs and praises.

Bonnie Raitt was direct in her hosannas about his work: “You can’t do better than Randall Bramblett!”

Bramblett returns to Jacksonville Beach for an intimate  performance at the Blue Jay Listening Room with guitarist Nick Johnson, in support of his 15th solo album, Pine Needle Fire (New West). The 12-song collection has rightfully garnered critical acclaim from outlets including No Depression, Relix, American Songwriter and Uncut.

You’ve described how Pine Needle Fire, is in part about the passing of time, or impermanence, loss, and also the current national political climate. So, you definitely didn’t set out to write a party record this time around.

(Laughs). Yeah, I don’t seem to be able to do that. “Just have a happy time, dammit!” We finished this record right after the pandemic hit. We had to go into the studio one at a time to finish final overdubs and we were getting ready to release or to finish up, and then pandemic hits; and we didn’t know how deadly it was gonna be. And New West was good with [the band finishing the overdubs one at a time]. And God knows, we didn’t know when the pandemic was going to be over. We had recorded it all live in the studio, so we had to have things like horns recorded one at a time.

Were these songs born directly out of the political division and pandemic of the last couple years or had they already been in your mind?

“Another Shining Morning” was definitely political, in the case of “God, it all seems so hopeless.” Everything seemed so grim. But a lot of it, like “Pine Needle Fire,” was about growing up in south Georgia: the feeling of falling in love for the first time and thinking about the role of the environment down there, with turpentine and smoke, the sand and fire towers. All of those images of my youth.

The album has an interesting dual-guest appearance in Tommy Talton playing Duane Allman’s early ‘60s Gibson SG on the tune “I’ve Got Faith in You.” With your experiences with Talton and members of the Allman Brothers Band, there’s a nice poetic circularity in that contribution to the album.

Certainly. And Tommy knew Duane. I never knew Duane but I heard him play early on. Tommy was pretty good friends with him. So, it made sense to have Tommy play; plus, he’s a great slide player. It felt right to have him play that guitar, on that song.

You know, when I’ve tried to describe your “sound” to people I hit an impasse and usually say something like, “He’s this cool songwriter’s songwriter from Georgia.” I mean this in the sense that “I’ve Got Faith In You” touches on folk-gospel while “Even the Sunlight” features jazz voicings and psychedelic guitar. But both songs still sound like “Randall Bramblett.” Since pop audiences seem to like predictable music, do you think being unpredictable has been a hard-wired hindrance?

Oh yeah, definitely. There’s no easy label. I mean, we finally landed on the term “modern roots” (laughs), which sort of fits you know, because it can have some weird psychedelic stuff, but it’s all grounded in blues and roots and gospel and southern music. But it’s also kind of weird with weird loops going on. You know, just unusual arrangements and things that are not straight ahead. We finally have a label with modern roots but it’s too friggin’ late!

Well, the Americana label is still aggravating since that could be Charley Patton, the Fugs, Skip Spence and Lucinda Williams.

I know. It started as alt-country and soon was used to describe anything that’s not majorly successful (laughs). So modern roots kind of fits but yeah, it has been a hindrance. And that’s not just the label, but the music is kind of a wide swath of different styles that I’m drawing from, because that’s just the way I am. Those are the kinds of music that I feel strongly about and relate to.  So, as I might be writing something that’s more like me sitting with an acoustic guitar and “I’ve Got Faith In You” is one of the most straight-forward songs I’ve ever written. And then otherwise, I might be sitting with a loop of some kind of weird ambience going on and write that way. So yeah, I don’t know, it’s just gonna pull from a lot of different things, because that’s the way I grew up. I grew up imitating Black artists doing R&B kind of stuff, and then Dylan came along, so I got into the folk thing. Gospel has always been a huge influence. A little bit of jazz, but I’m definitely not a jazz player. But I can hear where it would be: “Where is the center for this guy?” as far as song writing. But for me, it all feels right so I can’t make myself be one style.

You mentioned the loops, and this intrigues me, as it seems that unlike many of your peers, you have never shied away from utilizing atmospheric and experimental sounds; particularly on a track like “Pine Needle Fire.” How do you balance these experimental electronic qualities with an intimate ballad?

When I’m writing, I’ll throw those things in there just to give myself energy and inspiration. You know, something about those ambient or trashy kind of weirdness things that sometimes is distracting, but other times, it gives it a depth. And it inspires me to write a certain way, or to come up with different lyrics, or to go a certain way with the meaning of the song. I’m inspired by sounds that I can pull off with whatever software I’m using and write a song from that. It just inspires me to hear those things. And I always want to try to be pushing a little bit of sonic boundaries, just try different things. It makes it more interesting, but it’s a fine line. You don’t want to get into being cute or doing something that distracts from the song right. I don’t want to be a straight-ahead writer. And there’s another problem (laughs).

This might be another sweeping observation, but it seems like people that inhabit a lot of your songs are people either on the upswing or the downswing.

It seems like you are drawn to writing about broken people on the mend or spiritual transformation.

Yeah, I’m drawn to people that are down and out. And then maybe have gotten some type of enlightenment or some help or something. That probably comes from one of the biggest events of my life for me, which was getting sober from a long period of many years; from almost dying. So, I have the experience of loving the old sordid life, you know: the sleazy bars, characters, loving all of that, and then the reality of where that all leads. And the possibility of recovery to sort of mix them in there. I was always trying to go to the sleaziest bars. Because part of my drinking was about trying to get crazy and be Jack Kerouac or something. Just pushing myself over the edge and then hanging with the weirdest characters, and then maybe I could be creative, you know that kind of self-destructive bullsh**. But I’m still drawn to writing about those down-and-out characters.

Unless they’re a total psychopath, I think any artist starting out has to somehow reconcile working with the inner critic. You find success and then encounter a whole industry based on criticizing your work. Even though you have evidence of having success and a loyal fan base, do you still negotiate with the “inner critic” when it’s just you, a keyboard and a blank piece of paper?

All the time. I’ve been dealing with that a lot lately. Recently, I got asked to do a writing, seminar-kind of teaching thing. I’m like, “I’m the last person you want to try to teach how to write a song.” I haven’t had any luck lately. I’ve been working with one song for a long time. And I don’t know what I’m doing. You know, and I don’t even know if I’m a good writer, that kind of thing. Because there’s always a doubt, even if I’m writing something that I like, it’s like, “Is it really any good?” There’s always a lot of doubt. I think that’s just part of it. I mean, maybe some people have a lot more confidence. Yeah, but not me. If I make something that sounds like I can live with? (Laughs). “Okay, that’s good enough!”.