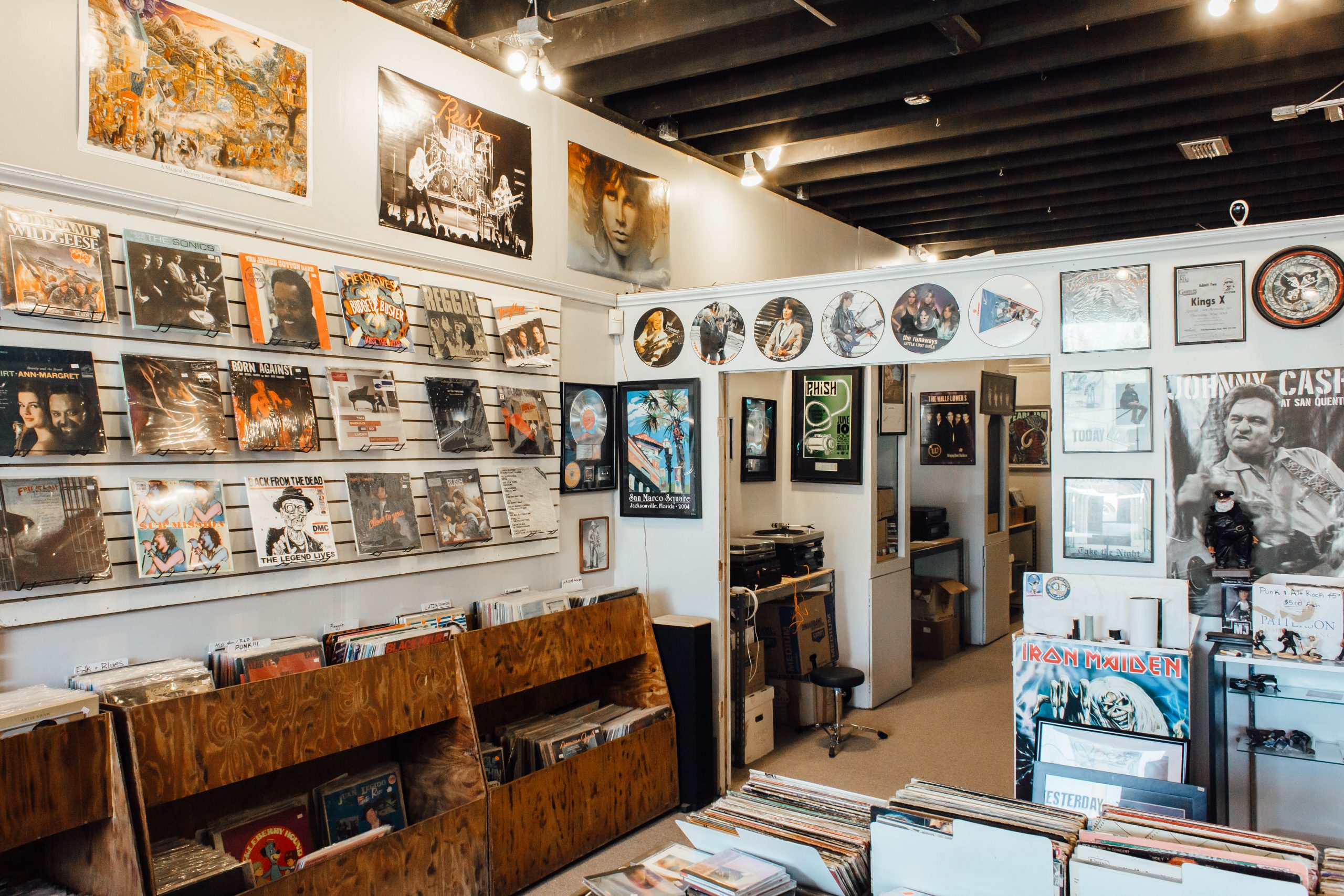 Black Friday, the annual glut of retail deals that traditionally follows the annual glut of holiday feasting, is upon us. And while you’re no doubt inundated with targeted advertisements for minimalist Le Creuset knockoffs, expensive-yet-precariously-easy-to-lose earbuds, Pelotons, et al. across all your social media feeds, we at the Jacksonville Music Experience encourage two things:

If you’re looking to help a loved one start or beef up their vinyl collection, Northeast Florida’s many music retailers won’t leave you wanting. With more than a half-dozen independent music stores specializing in a broad range of genres spread out across the First Coast, there’s never been a better time to shop for vinyl in Northeast Florida.

Here’s the JME team’s list of the best record stores in and around Jacksonville.

Be sure to follow these shops on social media and/or call to confirm business hours, as holiday shopping hours are subject to change.

Tucked behind an innocuous Lakewood strip mall, Wolfson Equipment and Records is well worth the vinyl grail quest. I don’t know if Wolfson qualifies as one of the largest record stores in the USA, but it’s surely a titan in the Southeast. Until recently, I lived a stone’s throw from this Brobdingnagian warehouse full of vinyl of all formats and CDs. Whenever I walked in, shop proprietor Ron talked my language well: the doomed tongue of the geeky prog/psych-blues-rock collector. And he spoke that dialect all too well, suggesting releases with a staggering knowledge of odd-and-heavy albums. I’d walk in on pay day and walk out with a stack of used or reissued LPs and CDs of bizarre Dutch acid rock or mellotron-drenched baroque elf-rock. Along with a felony amount of prog and psychedelic-blues rock, the store carries a slew of new and used indie, hip-hop, metal, and punk releases, and even sells studio gear. Rows of 45s will keep the most ardent deep digger scrunched over for hours, flipping through obscure soul and rock sides. If you go to Wolfson, don’t pick a day to test your music-buying addiction. Relapse is certain.–Daniel A. Brown

Thanks in large part to relatively low housing costs and a new wave of locally owned and operated businesses lining Edgewood Avenue, Murray Hill now threatens to overtake Riverside as the city’s hippest district. When they opened the cozily apportioned Eraser Records in the summer of 2020, musicians and vinyl-fiends Lauren and Matt Hamilton played an integral role in creating the swell of energy now cresting over the westerly Jax neighborhood. By and large, Eraser’s offerings are an extension of the couple’s eclectic tastes, carrying a wide selection of all things indie, electronic and noisy, as well as books and DIY swag, much of which is screen-printed in the back of the shop. Like most music lovers of a certain age, the duo is rigidly genre-agnostic, just as willing to sell you a dissonant Royal Trux record as they are to special order you that Olivia Rodrigo collector’s edition LP––lest you otherwise spend your dollars at Walmart.–Matthew Shaw

Tiger Records opened up shop in Riverside in November 2019, making it the newest record store addition to the city. Owner James Siboni, has toured the world as a musician, playing with several heavy bands, including most recently as the bassist for punk outfit Bane. Throughout his travels, Siboni says he tried to stop in every record store, in every city. Not only was he amassing his own personal collection, it was market research of sorts. In 2016, after the dissolution of Bane, Siboni moved back to Jax and set his sights on opening the kind of record shop that he’d want to frequent––one heavy on the underground subculture, but also well-lit and meticulously organized. True to form, Tiger’s selection of underground punk, metal and other rarities from noisy sub-genres is quite impressive. Equally impressive though is Tiger’s selection of modern pop, rap and new releases from the top of the indie- and popular-music charts. Merch and social media are key to Tiger’s success. The shop’s Instagram account is on point––updated daily with new records and staff picks. And Tiger’s growing clientele seems just as likely to cop records as they are  to scoop up some of the shop’s wildly popular branded swag, which Siboni rolls out at a consistent clip.–Toni Smailagic

For those of us living somewhere among Jacksonville’s urban sprawl, St. Augustine remains a solid getaway, worth a day-long walkabout or a (to borrow a popular-yet cringy phrase) staycation. And while real Northeast Floridians might want to avoid downtown St. Aug’s more touristy haunts, Tonevendor is certainly worth dodging vacationers and horse manure.  Located in the heart of St. Augustine’s historic district, in between Flagler College and the Lightner Museum, Tonevendor’s collection is literally bursting from the crates with new and used vinyl, with an emphasis on independent music and college-radio fare. Dig into the shop’s garage and psych sections and roll the dice on one of the previously rare compilations repressed and stowed away in Tonevendor’s crates.–Matthew Shaw

Operating out of the same space, at the corner of Edison and McDuff, since the late 1960s, DJ’s is easily the oldest active record shop in Northeast Florida, if not the whole state. Most of their stock is older than most of our readers, and some of it could be considered downright obsolete. CDs, LPs, 45s, 78s, cassettes, 8-tracks, VHS tapes, laser discs and even the occasional book, as well as vintage stereo components and random collectibles whose target market may or may not actually exist. They specialize in golden era rap, classic jazz and old-school R&B, but you can still find the occasional cut from the 21st Century, if you look hard enough. If you have OCD, or you’re claustrophobic, or allergic to dust, mind the exits; you will lose your mind, quickly.–Shelton Hull

A post shared by Yesterday And Today Records (@yesterday_today_records)

Formerly a weekend pop-up at the Beach Blvd. Flea Market, San Marco’s Yesterday and Today has a good selection of used rock, pop, soul and jazz. Consistently stocking the shop with new inventory, including reissues and new collector’s pressings, Yesterday and Today has been the region’s best bet on Record Store Day, the one day a year in which record collectors resemble the Black Friday mobs outside Walmart.–Matthew Shaw