A Guide to the Best Holiday Music Events in Jax 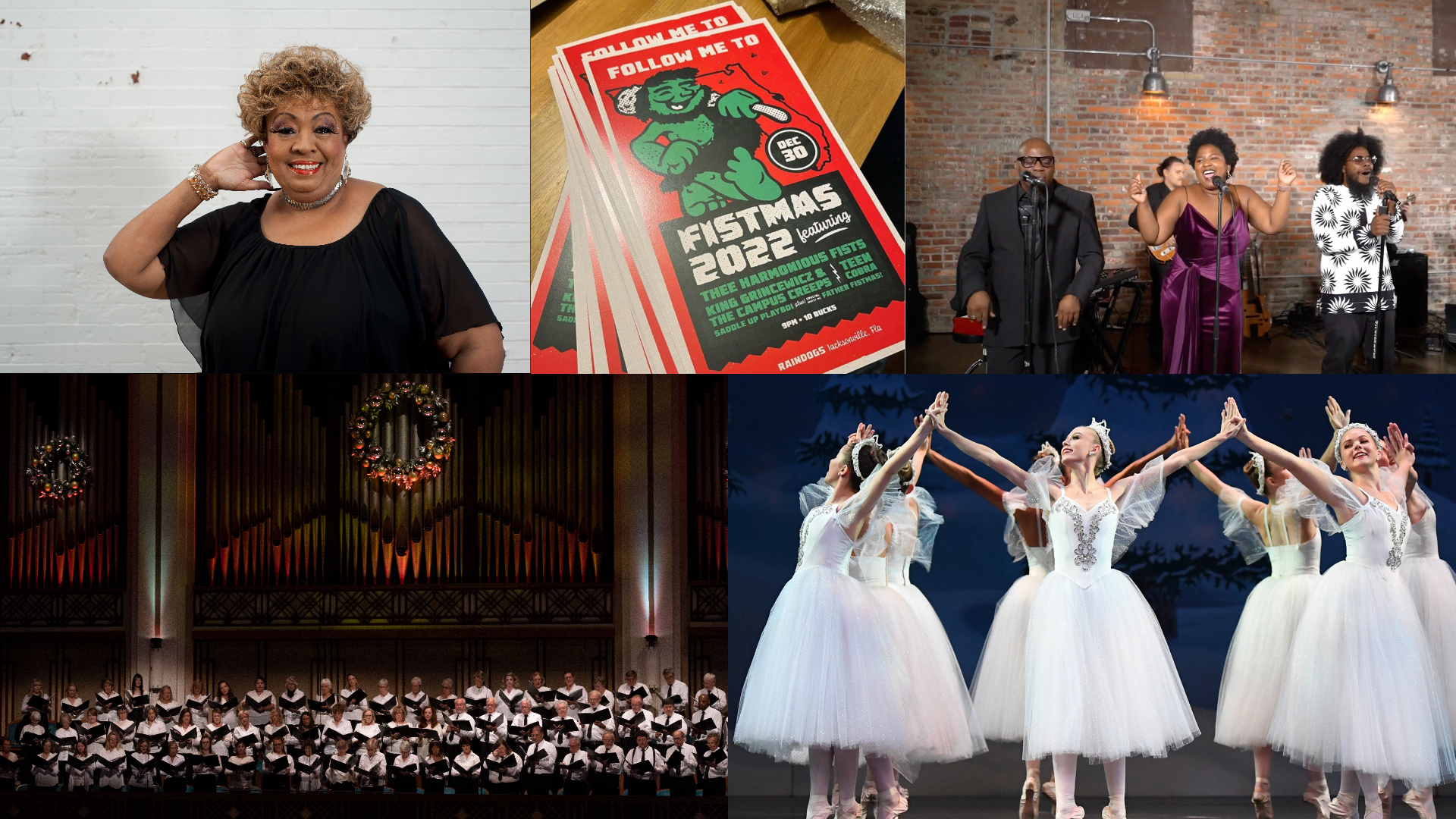 The holidays are always fun and festive, especially for fans of local music. While we have plenty of national and international acts coming through this region, December is a time for putting the spotlight on local artists and organizations, many of whom have special programmes of music, custom-made for the season. Here’s our guide to the best holiday music events in Jax.

Bold City Classics has developed a fresh approach to big-band music, which is typically rooted firmly in the jazz bag. BCC’s music expands that reach to encompass aspects of pop, soul and R&B, and that’s allowed the band to cultivate a steady business playing weddings, corporate events, etc. BCC’s Big Band Christmas will see them applying their talent to the music of the season, songs they’ll be rendering in their characteristically quirky style.

It’s been a good year for music in Springfield, and SPAR is wrapping it up nicely with a day of festive fun on 10th and Silver with free food and candy, raffles and even a visit from Santa himself. Best of all, there’s the chance to see three of the city’s favorite acts, representing three very different styles of music. There’s the neo-soul sound of Springfield’s own Mama Blue, the fingerpicking folk styling of Jesse Montoya and the Dixieland revivals of Junco Royals, who bring a certain Left Bank feel to their Storyville swag.

Over the last few years, Sunny “Miss” Parker and her team have slowly built Jacksonville up into a hotbed of the Southeast US burlesque scene. They have practiced their art in places like Volstead, Square One and even Sweet Pete’s, but for the holidays they are returning to the place where they first made their name, Rain Dogs in 5 Points. Hosted by Miss Parker and Anita Nightcap, with music by DJ Mas Appeal, the lineup includes Laila, Eris Andrews, Trashique, Mari Devi Haze, Indie Sinclair, Corbin Monoxide and Lyla Jay Blu.

Jacksonville Children’s Chorus, Cool Side of Yuletide: A Drive-In Holiday

The JCC has been one of the city’s real treasures for decades now, but their profile has rapidly expanded in the social media era. The 14th edition of their holiday concert is a daytime show featuring the chorus, the Voices of Jacksonville, and special guests.

There are few events that are so fully synonymous with Christmas in Jacksonville than the First Coast Nutcracker, which has brought joy to kids and adults alike for half a century.

The choir loft at the Jacksonville Center for the Performing Arts has rarely been open to the general public, but the symphony has made seating available there this season. It is an odd and somewhat disorienting vantage point, watching the orchestra from behind, facing the audience. These two sets of “Messiah” allow fans to see the loft as God intended it, filled with nearly 100 members of the Jax Symphony Chorus, augmented by the entire orchestra–one of the largest assemblies of musicians that you’ll ever see in Jacksonville, or anywhere else, for that matter.

Linda Cole is the niece of the late great Nat “King” Cole, whose rendition of “The Christmas Song” remains arguably the most well-known American song of all-time. But Linda has been out there working as a solo act for over 50 years now, playing venues both large and small from coast to coast. In recent years, much of this work has been done in collaboration with pianist Joshua Bowlus. Their two sets at the Blue Jay are among the few sets that Cole has played in Northeast Florida this year, and those are always a treat. They are joined by three of the region’s finest instrumentalists: Juan Carlos Rollan on tenor saxophone, Stan Piper on upright bass and Ben Adkins on drums. This group is a throwback to the era of torch songs, smoky piano bars and cabaret cards. Great band, and a great venue.

Two generations of indie-rock excellence come together at Jack Rabbits with Parks & Razz and Tonal, the brand new project from local legend Ryan Turk. There’s also Mommy’s Little Helpers, who have quickly made a name for themselves after less than two years on the scene. That show is just the fourth of 12 Christmas rock shows scheduled from December 17-30. Highlights include The Kreepy Tikis on the 18th, Soapbar and Luci Lind on the 21st, The Julius Airwave on the 23rd, Brandon Lucas on the 26th, and Appalachian Death Trap on the 30th.

The Crescendo Amelia Big Band has made this their signature production since 2014, and it functions as a showcase not only for the full band, but also a variety of local entertainers including artists, actors, aerialists and singers. Over 30 performers in all — not counting the audience, who play a role themselves.

Rising local hip-hop artist Daren Robert tops a stacked bill at the Justice Pub on the 23rd, which is probably the last notable concert prior to Christmas Day itself. The lineup for this free show also includes Trel Deleon and DJ 3Clopsi.

Fistmas has been an annual feature of Rain Dogs since its founding a decade ago. This event put the focus on rock and roll, in all its raucous, riotous glory. This year’s lineup includes King Grincewicz & The Campus Creeps, Teen Cobra, Saddle Up Playboi and, as always, Thee Harmonious Fists.