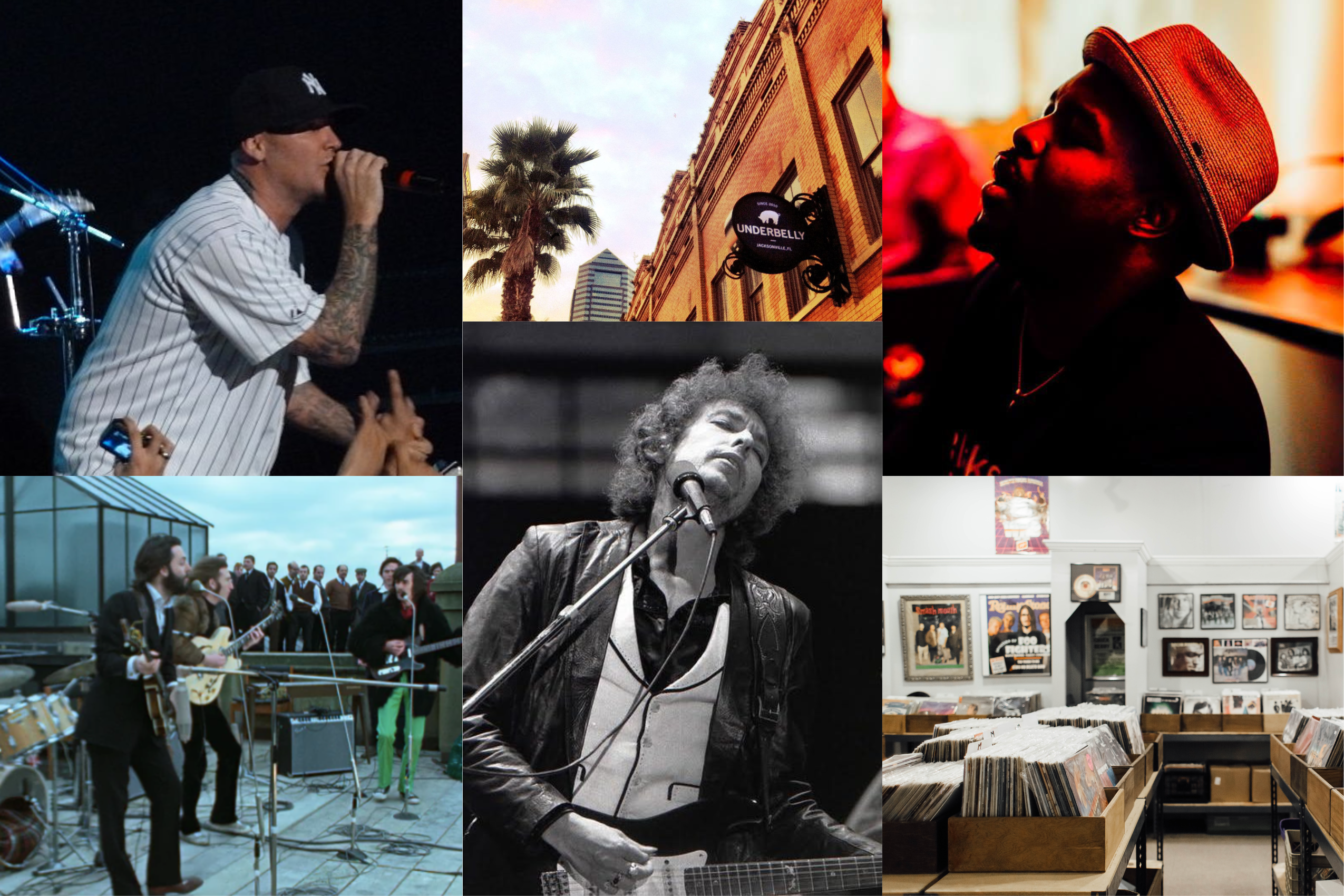 We launched the Jacksonville Music Experience website in the summer of 2021––as interesting a year for music as any.

In music news: vinyl records were in short supply due to high demand; Bob Dylan and Bruce Springsteen sold the rights to their music, while Taylor Swift sought to reclaim hers; Lil Nas X broke the internet and broke down barriers; Limp Bizkit popped up for a viral moment; and The Beatles were the most talked-about band in the world.

We covered all of that and more, while sharing playlists, reviewing new music from local, regional, national and international artists, digging into the history of music in Jacksonville and shedding light on the current vibrancy of the city’s music scene.

But COVID loomed large, too. Just as we got JME cranked up, and COVID cases were falling, music venues were coming back online and some of the more ambitious artists were preparing to hit the road. Then Delta hit. Tours were again put on hold. Venues weighed a range of precautions to stay in business––including requiring proof of vaccine requirements. The State of Florida pushed back.

Six months later, as much as things have changed, they’ve stayed the same. Omicron is the new variant. And musicians and venues are again navigating an uncertain future.

Through it all, we kept the music going on JME

ICYMI: Here are some of the stories that resonated with our readers this year.

Why Limp Bizkit were trending in 2021

Two concerts. More than two decades apart. In one of 2021’s more surprising occurrences, Jacksonville-bred 90s nü-metal band Limp Bizkit went viral based largely on the role they played in the HBO documentary Woodstock ‘99: Peace, Love, and Rage and the new look singer Fred Durst showed off during the band’s raging set in front of a couple-hundred-thousand concertgoers at last summer’s Lollapalooza festival. –Read the full story

Kick Out the (Jazz) Jams

On any given night in Jacksonville, members of the city’s jazz vanguard can be found jamming at establishments across the region. JME Contributor Shelton Hull dove into the history of the jazz jam session and put together this comprehensive night-by-night list of the city’s best jams. –Read the full story

Buckets of (Making It) Rain

Bob Dylan sold his catalog for a reported $300 million

Perhaps no artist had a more financially successful 2021 than Bob Dylan. After the iconic artist sold the publishing rights to his extensive catalog, a genre- and decade-spanning index of 600-plus songs, for a reported $300 million, JME contributor Glenn Michael Van Dyke looked at the ripple effects for the music industry and dove into the inequitable and confusing morass that is Spotify’s payment system. –Read the full story

JME contributors own up to their embarrassing listening habits

As part of our irregular series Crate Diggin’, JME Contributors came clean about the records they spin when (they think) no one else is listening. No sonic shaming allowed here! Albums by Jimmy Buffet, Lionel Richie, Patsy Cline, David Bowie and more made the list. –Read the full story

Jax Music Venues VS The State of Florida

As Delta raged last summer, and touring artists began pushing for more safety precautions, the two largest live music companies in the world, AEG Presents and Live Nation, announced plans to require proof of vaccination at all the venues they operate in the United States. The state of Florida, meanwhile, had just passed a law prohibiting businesses from instituting such mandates. We talked to Jacksonville venue owners and impresarios about how they were navigating the impasse between state law and the wishes of performing artists. –Read the full story

As we continue to build a curious listening community on JME, our conversations with visual artists, which we’ve dubbed Sound & Vision, have been some of the more engaging features we’ve published. Prior to the opening of his 2021 solo exhibition at the Corner Gallery in Downtown Jacksonville, artist Overstreet Ducasse talked to Daniel A. Brown about the music that inspires his process and shared an eclectic playlist of tunes. — Read the full story

In September, Underbelly, the much-beloved but short-lived Downtown Jacksonville music venue (re)opened its doors, thanks to Jason Hunnicutt and the 1904 Music Hall crew, who have been building a musical empire in the city’s Urban Core. Weeks before welcoming the first crowd to the venue in more than a half-decade, Hunnicutt chatted with us about why it made sense to bring Underbelly back. –Read the full story

10 Jacksonville Artists to Watch in 2022

JME contributors pick the local acts poised for a breakthrough

The JME team reviewed the music of nearly 100 Jacksonville artists in 2021. To wrap up the year, we picked 10 artists we think are bound to make some noise on the national stage in the year ahead. –Read the full story

The JME Team tried its darndest to keep its collective ear to the ground in 2021. We’d love to pat ourselves on the back, but we know there were plenty of stories that snuck under our radar. What did we miss? Drop us a line at: editor@jaxmusic.org