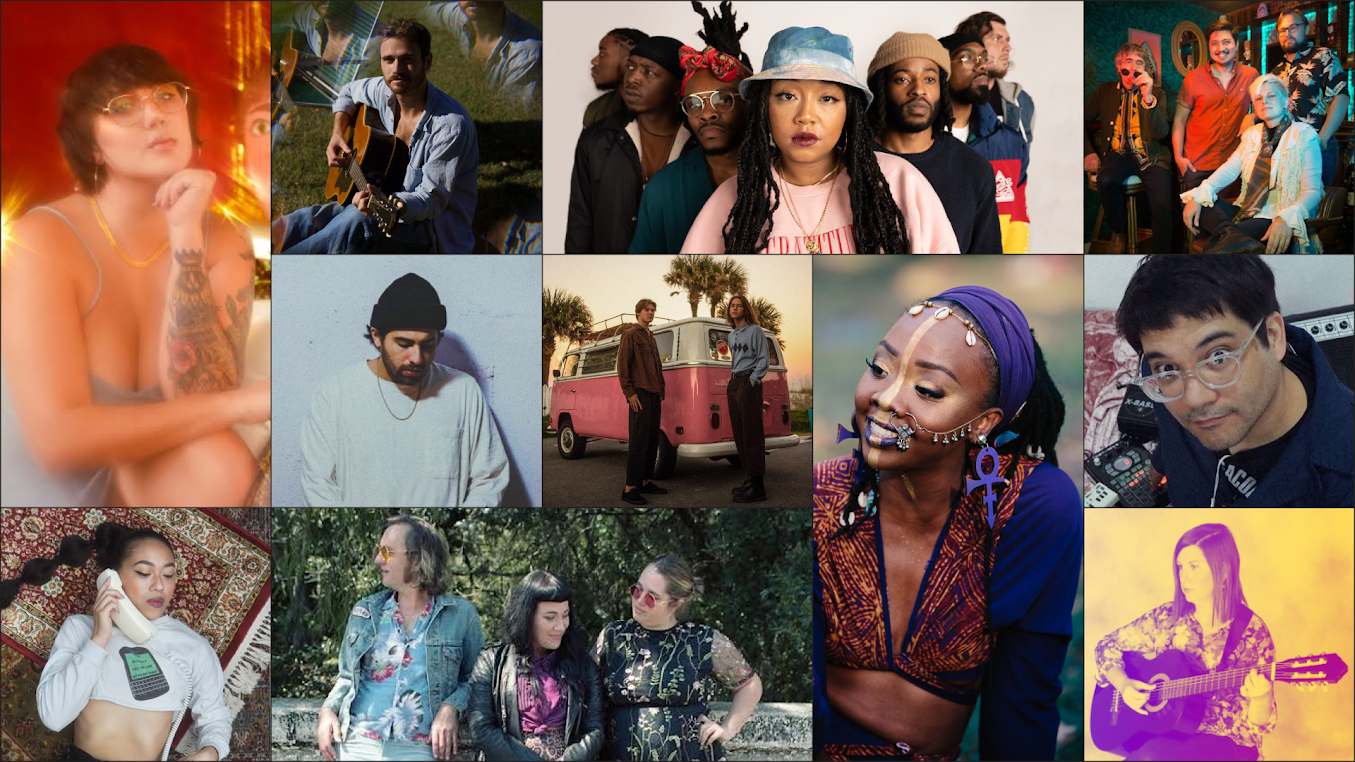 WJCT Public Media and the Jacksonville Music Experience are putting the spotlight on the artists making noise in Northeast Florida, presenting three unique nights of music at three different venues around Jacksonville.

Since we launched JME in the summer of 2021, our team of local contributors has been cranking out content, including curated playlists, reviews, profiles, industry news, think-pieces, concert recommendations and a lot more. In that short span, we’ve also written about the music of more than 100 local artists.

With the JME Showcase Series, we’re hoping to bring the music community (artists performing in every genre and curious listeners alike) together.

Here’s a rundown of the two remaining shows:

Jacksonville’s Stacey Bennett, better known as Folk is People, is one of the city’s most talented and well-respected songwriters. Bennett’s songbook traverses peaks and valleys, a mix of tunes that range from diaristic and lovelorn (“Ghost Birdie”, “Bloodletting”) to tongue-in-cheek and cathartic (“Gutter Poet”, “Step Mama Blues”). Folk is People’s latest, Live! From the End of the World, is available on Bandcamp.

Local indie-garage-rock trio Poolboi emerged from the local scene in 2020 and has already made a lot of noise, bringing their harmonious cacophony to local stages, opening for big-time indie acts including Sheer Mag in 2021. The group’s debut single is due out in early 2022.

On the heels of a promotional campaign with big-time beverage brand Sprite, Duval hip-hop collective L.O.V.E. Culture released perhaps the most talked about local record of the year in the summer of 2021: 1827 N Pearl. Featuring five artists with distinctive skillsets––Che Forreign, Rob Mari, Spiritxiii, Flash the Samurai and Easyin2d––the group finds strength in numbers, as well as individually within themselves, via a chill-wave, downtempo collection of harmonious hip-hop and emotionally intelligent rhymes that, even when crossing into the braggadocious, more often cite spiritual searching and self-actualization strategies rather than any hollow get-money posturing.

Since 2020, indie-pop singer-songwriter Juan Mallorca has been riding the chill wave of several sunny, approachable singles under his nom de plume Huan, showing off his versatility with silky-smooth vocals and understated musicianship on songs like “Days” and “Idle Mind.” Read why Huan was named one of JME’s 10 Jacksonville Artists to Watch in 2022 here.

Though they draw their name from a Neptune Beach thoroughfare, Seagate’s sound could easily have emanated from Manchester, UK circa 1982. On tunes like “Dog Days,” propelled by lush sonic layers and frontman Sam Baglino’s brooding vocals and vibrato-heavy rhythm guitar, Seagate’s music calls to mind The Smiths’ mid-80s opus The Queen is Dead.

Indie vaquero Landon Gay, aka Howdy, has carved out a nice niche in the local music scene, mining a novel brand of Americana with a modern sonic toolkit and original songwriting. On tunes like “El Paso” and “Stay in LA,” Howdy tackles pining ballads with indie sensibilities.

Though she released her debut single in January of 2022, Alexis Rhodes, aka Bad Madonna, is well-known among the city’s insular community of song crafters for her top-flight voice, melodic sensibility and lyrical dexterity. Bad Madonna’s debut EP is expected later this year.

-Watch the video for “High Resolution”

A pillar of Duval’s hip-hop scene and the city’s defacto poet laureate, Ebony Payne-English has recently undertaken her most ambitious work to date. In 2021 she dropped Kuongoza, her sixth studio album, which was released with an accompanying visual: a full-length hip-hopera of the same name. Payne-English is already at work on a follow-up.

With a smattering of well-received singles and videos, and a spot on NPR Music’s #NowPlaying blog in 2021, local singer-songwriter Kayla Le, who works under the moniker Sailor Goon, has a high-ceiling. Le’s top-flight vocals and propensity for blending R&B, jazz, psychedelia and more also landed Sailor Goon on JME’s list of 10 Jacksonville artists to watch in 2022.

-Stream Year of the Bore on Spotify

Souvineer is a new project from Alissa Leonard, whose group Isabela Parole is widely admired in the Jax music scene for their songwriting and blend of folk and indie rock. Souvineer’s first EP, Snowglobe, sparkles with lush production, intriguing imagery and gorgeous melodies.